Sonnets from the Portuguese

In the third window, Robert is dressed in red, the color of love. The purple and gold material of his flowing cape is a graphic representation of his marriage proposal, but Elizabeth's hands are crossed in a gesture of refusal. She is worried about the six-year age difference and does not want to burden Robert with an invalid wife. More troubling, her father had made it clear that he expected none of his eleven children to marry. 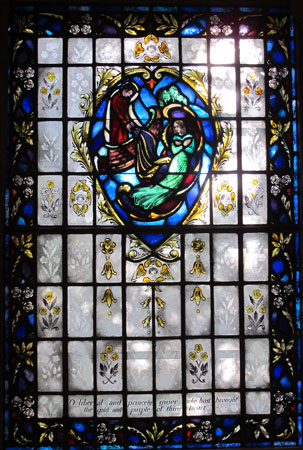 WHAT can I give thee back, O liberal
And princely giver, who hast brought the gold
And purple of thine heart, unstained, untold,
And laid then, on the outside of the wall
For such as I to take or leave withal,
In unexpected largesse? am I cold,
Ungrateful, that for these most manifold
High gifts, I render nothing back at all?
Not so; not cold,--but very poor instead.
Ask God who knows. For frequent tears have run
The colors from my life, and left so dead
And pale a stuff, it were not fitly done
To give the same as pillow to thy head.
Go farther! let it serve to trample on. <

O liberal and princely giver who hast brought
the gold and purple of thine heart.;

In memory of Austin Moore