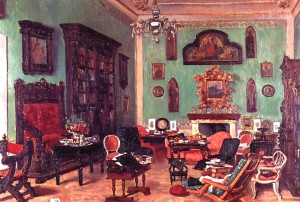 Salon at Casa Guidi
by George Mignaty, 1861
(On loan to the Armstrong Browning Library from Mills College, Oakland, California.)

Plan a Visit to the Brownings' Home in Florence, Italy

The apartment is open to casual tourists from April through November, 3:00 until 6:00 pm on Mondays, Wednesdays, and Fridays.

Casa Guidi, in Florence, Italy, was the central home of Robert and Elizabeth Barrett Browning for fourteen years (1847 - 1861). Summer months were often spent in the cooler hills; sojourns were made to Paris, Rome, Fano, Siena, London, and other areas; but it was always Casa Guidi that they considered home. Their only child was born there, Robert wrote Men and Women and envisioned the plot of The Ring and the Book, Elizabeth wrote Casa Guidi Windows and Aurora Leigh, they entertained notable visitors, and Elizabeth died there in 1861.

Casa Guidi, is a five-minute walk from the Ponte Santa Trinita over the Arno, down via Maggio (near the south wing of the Pitti Palace). It is a suite of eight rooms situated on the piano nobile (to Americans, the second floor) of Palazzo Guidi. Look for a memorial plaque honoring Elizabeth Barrett Browning mounted over large carriage doors. A door bell marked “Casa Guidi” is at the left of the doors.

Robert and Elizabeth leased the apartment in 1847, shortly after the Guidi family divided the grand state rooms on the piano nobile floor into two apartments. Elizabeth described it as "a suite of spacious and delightful rooms . . . with a terrace that I enjoy to the uttermost through being able to walk there without a bonnet, by just stepping out of the window. The church of San Felice is opposite." Originally a fifteenth-century structure built by Lorenzo Ridolfi, the triangular shaped corner house was bought by Count Camillo Guidi in 1618. In 1650, the adjoining house was given to the count's nephew, and the two houses were combined and refurbished in the late 18th century.

It was in 1849, soon after the birth of their son, Robert Wiedeman Barrett Browning (or "Pen"), that Elizabeth started calling the apartment "Casa Guidi," turning it from "a mere palace into a home"--a home that held a multitude of Elizabeth's sofas, Robert's chests of drawers, a magnificent gilt-framed mirror, and hundreds of personal possessions. After Elizabeth's death, Browning tried unsuccessfully to have the salon photographed, but at last turned to his friend George Mignaty for an oil painting of the room. The original painting, now on loan to the Armstrong Browning Library by Mills College, Oakland, California, is on display in the Elizabeth Barrett Browning Salon.

Browning left for London with his twelve-year-old son and never again returned to Florence. However, in 1893, Pen Browning bought Palazzo Guidi and reestablished most of his parents effects there, hoping to turn it into a memorial to them. Unfortunately, those plans never materialized; so upon Pen's death in 1912, his widow and his Moulton-Barrett cousins sold Casa Guidi to an American admirer of the Brownings, Ellen Laura Centaro. Through her efforts, a Browning Foundation was formed in 1916 to preserve Casa Guidi, but circumstances led to its disbandment in 1931. Casa Guidi was rented out, and by 1960 was a Linguistic Club run by Ruth Borchardt, a Browning enthusiast. She kept the rooms open to the public and made an effort to raise funds for their upkeep; but, again, circumstances intervened. In 1969, the Centaros decided to sell the property. At this point, the New York Browning Society stepped in and mounted a major fundraising campaign. Seven of the original suite of eight rooms were saved. Through their efforts, title to the apartment was passed to the newly-founded Browning Institute in 1971. Casa Guidi, the poets' Florentine home, was saved from commercial development.

For over twenty years the Browning Institute was the guardian organization for the upkeep of Casa Guidi. Resident caretakers were organized to show the rooms, a library and museum were established, and cultural events were held to encourage the study of the lives and works of the poets. During systematic and costly restoration efforts the exact colors of the rooms and beautiful frescoes were revealed. After painstaking work, the apartment began to look much as it had during the Brownings' residence. Now, furnishings were needed. By 1990, it became evident to the Directors of the Institute that they needed to seek help from larger institutions in order to fulfill their goals for Casa Guidi.

Various institutions, including Baylor University, were approached; but after months of discussion, official ownership of Casa Guidi was transferred to Eton College in January 1993. By turning to Landmark Trust for help in restoring and refurbishing the building, the four main rooms have been restored in a Victorian style, while a modern kitchen and bedrooms have been installed in the former servants' quarters. In its present arrangement, Casa Guidi is a study center for Eton boys for seven weeks each year and a Landmark Trust holiday apartment for the rest of the year, while maintaining visiting hours for casual tourists. In July 1995, a formal reception was held as the British Ambassador in Italy opened the newly-appointed building. Since then, hundreds of guests have stayed in the Casa Guidi apartment and many members of the general public have toured the four main rooms.

The Friends of Casa Guidi, in support of the Florentine home of Robert and Elizabeth Barrett Browning, assist Eton College through generous contributions, which are used exclusively for Casa Guidi. In recent years, they have obtained copies of the bronze plaque of Aeschylus and the bronze medallion of Robert Browning by Thomas Woolner, original items from Casa Guidi that are now at the Armstrong Browning Library. More recently the Friends have commissioned a copy of Fanny Haworth's painting of Pen Browning at the piano for the Drawing Room. Currently the Friends are focusing on the development of a Capital Purposes Fund, which will be held in reserve toward the future possibility of acquiring additional Browning rooms in Palazzo Guidi.

Thanks to the combined effort of The Browning Institute (with the Friends of Casa Guidi), Eton College and Landmark Trust, Casa Guidi remains a lasting memorial to Robert and Elizabeth Barrett Browning.

Owned by Eton College and maintained by The Landmark Trust, Casa Guidi is available for bookings at certain times of the year. For information, contact Landmark Trust, Shottesbrooke, Maidenhead, Berkshire SL6 3SW (tel. in England: 44.1628.825925; in the U.S.: 802.254.6868).

The apartment is open to casual tourists from April through November, 3:00 until 6:00 pm on Mondays, Wednesdays, and Fridays.