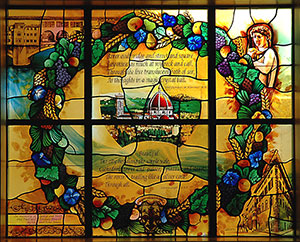 River and bridge and street and square
Lay mine, as much at my beck and call,
Through the live translucent bath of air,
As the sights in a magic crystal ball.

The city lies along the ample vale,
Cathedral tower and palace, piazza and street,
The river trailing like a silver cord
Through all.

The amber-colored Florence Window displays a central scene of the cathedral or Duomo, officially Santa Maria del Fiore, and the bell tower or Campanile, presented in a circular shape to suggest the "magic crystal ball" in the quotation by Browning. The Arno River flows under the Ponte Vecchio on the upper left and trails through the window's center "like a silver cord," using Elizabeth's words.

This wreath is inspired by the designs of the Florentine Della Robbia family of Renaissance sculptors known for crafting charming, lifelike garlands and wreaths of fruit and flowers in colored, glazed terracotta. It is made up of wheat tassels, blue flowers, varied leaves, and an abundance of fruit--pears, grapes, lemons, and peaches. At the base of the wreath, in red as it is most often seen, is the Florentine Fleur-de-lis, a popular emblem of the city.

The Ponte Vecchio, literally translated Old Bridge and the oldest of Florence's bridges, is seen in the upper left corner, arching over the Arno River. Casa Guidi, the Brownings' home in the city, was within walking distance. In medieval times, the bridge was home to food shops and butchers, but in the nineteenth century, as now, the merchants in the many small shops clustered on the bridge were mainly jewelers.

Michaelangelo's David, a masterpiece of Renaissance sculpture, looks down from the upper right, representing a legacy of world-renowned works by Florentine artists.

In July 1847 the poets moved to an apartment of seven rooms in the Palazzo Guidi on the Via Maggio, very near the Pitti Palace and the Boboli Gardens. They referred to the apartment as "Casa Guidi," and it became their principal residence until Elizabeth's death in 1861.