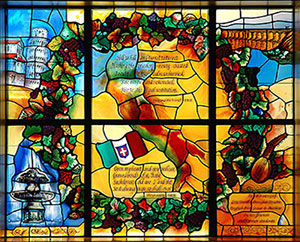 Open my heart and you will see
Graved inside of it, 'Italy.'
Such lovers old are I and she:
So it always was, so shall ever be!

The grapevine, closely associated with both the beautiful Italian landscape and Italian culture, forms the Italy Window's wreath, with ripe clusters of grapes in purple, red, and blue tones and varied-colored leaves in green and a touch of autumn's orange.

The central image shows the Italian peninsula, representing Italy as a whole. The tri-color flag, mentioned in the EBB quotation, was in use at the time of the Brownings' residence (1846-1861) and commemorates the hope of Italian nationhood which the Brownings, particularly Elizabeth, passionately shared.

The famous Leaning Tower of Pisa, the bell tower of the cathedral, is pictured in the upper left corner of the window. Upon arrival in Italy following their marriage in London on September 12, 1846, the Brownings lived in Pisa for five months before moving to the city of Florence.

Enhancing the window's lower left corner is an effervescent fountain representing one of the twin seventeenth-century fountains in Rome's St. Peter's Square. It is reminiscent of Italy's many fountains.

A Roman aqueduct, reflecting the sense of history that is inescapable when one travels throughout Italy, is depicted in the window's upper right corner.

In the lower right, an ancient lute evokes the music of Italy and recalls Robert Browning's love of music. In his poem "Parleyings with Charles Avison" he wrote, "There is no truer truth obtainable by man than comes of music."