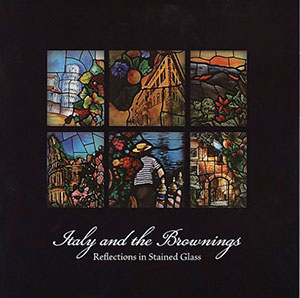 Robert and Elizabeth Barrett Browning moved to Italy shortly after their marriage in 1846 and eventually settled in the city of Florence. This was to be their permanent home until Elizabeth's death in 1861. Although they called Florence home for fifteen years, they traveled throughout Italy, staying in cities such as Venice and Rome for extended periods. As a result, Italy had a profound influence on the lives and the poetry of both poets.

The Cox Reception Hall was created during a 1994/1995 renovation of the ABL's first floor, funded by a gift from Margaret Cox of Houston. During the tenure of Dr. Mairi Rennie as Director of the ABL (1996 - 2002), a plan was formulated to convert the six large window spaces into stained glass. Research was conducted to select memorable quotations from the poetry of the Brownings; and, as a result, six themes were selected for the windows.

As donors began to come forward, Willet Hauser Architectural Glass of Philadelphia was chosen to design and create the windows. Willet designer Jane Collins and glass painter Magdi Mushriqui were instrumental in the inspirational qualities of each of the windows, with installation taking place between April 2001 and November 2007. The Cox Reception Hall windows add significant beauty to the Library and underscore the ABL's claim of holding the largest collection of secular stained glass in the world.

The basic design for each window incorporates a large wreath that surrounds a central image of an Italian location significant in the lives of the Brownings, along with memorable quotations gleaned from their poetry. Vignettes in the corners of the windows represent various aspects of the central subject. In addition, each of the six windows includes a dedication panel, located in a lower corner.

Please take a moment to enjoy the beauty of these windows, by choosing from the links below or from the call box at the right.

The country as a whole:

or the Italian locations significant to the Brownings:

Information for these pages is drawn heavily from a 2008 publication by Cynthia A. Burgess, Curator of Books and Printed Materials at the Armstrong Browning Library. Her booklet, Italy and the Brownings: Reflections in Stained Glass gives additional insights into the inception of the window project, the generous donors, and the creation and installation process. Copies of the booklet are for sale in the ABL Gift Gallery.