Sordello, a narrative study in the psychology of genius and the development of a soul, is considered one of the most obscure of Browning's works and was a critical failure when published in 1840. It is a fictionalized account of the life of Sordello da Goito, a 13th-century troubadour-soldier. It is set in northern Italy as the country undergoes the struggle between the Guelphs (partisans of the Pope) and the Ghibellins (partisans of the Holy Roman Emperor). Sordello is a Ghibellin. The poem reveals the troubles that Sordello is experiencing as he is torn between the practical and the sublime, the demands of his poetic imagination, and his involvement in the power and glory of politics.

In this window, Sordello is represented at the moment in his life when he must accept all the joys of earth as the Emperor's Liegeman, or renounce them and follow the dictates of his heart as champion of the common people. Here, he has snatched the Emperor's badge from his neck and stamped it beneath his feet. Symbols of the Guelfs and the Ghibellins appear at the left and right, along with the mandolin (symbol of the troubadour). Copper beech and nightingales form the border, motifs that are also featured in the Memorabilia Window, also in the Belew Scholars' Room.

Lines from Sordello are emblazoned above the bronze entrance doors of the Armstrong Browning Library. They capture the essence of A. J. Armstrong's inspiration as he undertook the goal of building the largest Browning collection at Baylor University:

Would you have your songs endure?
Build on the human heart! 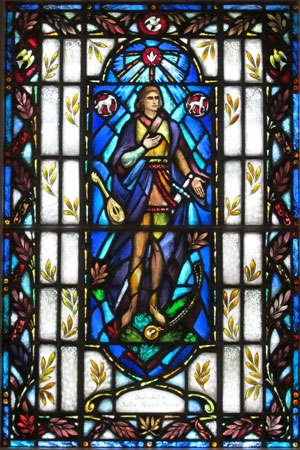 Here is the Crowd, whom I with freest heart
Offer to serve, contented for my part
To give life up in service,--only grant
That I do serve; if otherwise, why want
Aught further of me? If men cannot choose
But set aside life, why should I refuse
The gift? I take it--I, for one, engage
Never to falter through my pilgrimage--
Nor end it howling that the stock or stone
Were enviable, truly: I, for one,
Will praise the world, you style mere anteroom
To palace--be it so!