The idealistic figure of the young poet Shelley dominates this window. He is depicted holding a moulted eagle feather above his head, with a wing-spread eagle above. Copper beech and nightingales enrich the border, motifs that are also used in the Sordello Window, a companion window in the Belew Scholars' Room.

This four-stanza poem recounts a meeting between the narrator and another man who had once met Shelley. Based on an actual occurrence, Robert Browning remarked to W. G. Kingsland: "I still vividly remember how strangely the presence of a man who had seen and spoken with Shelley affected me." The narrator in the poem is excited about hearing the story and reflects on how small moments can stay with us forever. 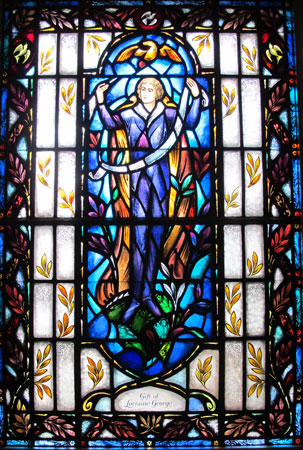 Ah, did you once see Shelley plain,
And did he stop and speak to you,
And did you speak to him again?
How strange it seems and new!

But you were living before that,
And also you are living after;
And the memory I started at--
My starting moves your laughter!

I crossed a moor, with a name of its own
And a certain use in the world no doubt,
Yet a hand's-breadth of it shines alone
'Mid the blank miles round about:

For there I picked up on the heather,
And there I put inside my breast
A moulted feather, an eagle-feather!
Well, I forget the rest.