True to the nostalgia of "Home-Thoughts from Abroad," the main image of the window suggests a rural English countryside, with lanes and hedgerows. The dominant elm tree in "tiny leaf" is surrounded by the "brush-wood sheaf," while the chaffinch sings in the blossoming pear tree. The border design is composed of buttercups and swallows. 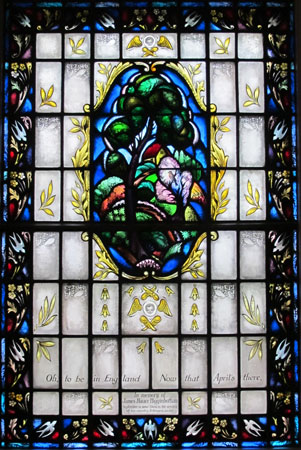 Oh, to be in England
Now that April's there,
And whoever wakes in England
Sees, some morning, unaware,
That the lowest boughs and the brush-wood sheaf
Round the elm-tree bole are in tiny leaf,
While the chaffinch sings on the orchard bough
In England--now!

And after April, when May follows,
And the whitethroat builds, and all the swallows!
Hark, where my blossomed pear-tree in the hedge
Leans to the field and scatters on the clover
Blossoms and dewdrops--at the bent spray's edge--
That's the wise thrush; he sings each song twice over,
Lest you should think he never could recepture
The first fine careless rapture!
And though the fields look rough with hoary dew,
All will be gay when noontide wakes anew
The buttercups, the little children's dower
--Far brighter than this gaudy melon-flower!

Oh, to be in England now that April's there.

In memory of James Horace Higginbotham