A Blot in the 'Scutcheon

Browning's play A Blot in the 'Scutcheon: A Tragedy was written in 1843 at the request of William Macready, and very rapidly, in four or five days. A misunderstanding led to a breach between the two friends. Although the three-act play was received with enthusiasm, circumstances prevented it from having a long run. The central image suggests the setting of the Earl's song. He is represented in hat and cloak beneath the tree, with Mildred silhouetted against her latticed window casement. The first phrase of his song is the quotation in the window. 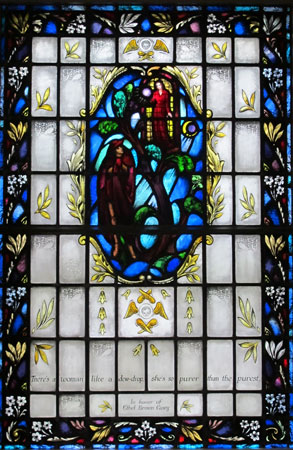 Excerpt from Robert Browning's
A Blot in the 'Scutcheon: A Tragedy

There's a woman like a dew-drop, she's so purer
than the purest:
And her noble heart's the noblest, yes, and her
sure faith's the surest:
And her eyes are dark and humid, like the depth
on depth of lustre
Hid i' the harebell, while her tresses, sunnier than
the wild-grape cluster,
Gush in golden-tinted plenty down her neck's rose
misted marble:
Then her voice's music . . . call it the well's
bubbling, the bird's warble!

There's a woman like a dew-drop,
She's so purer than the purest.

In honor of Ethel Brown Casey