This is one of the three oldest windows in the collection. The image replicates a painting done in 1640 by Guercino (Giovanni Francesco Barbieri, 1591 - 1666) that now hangs in the Civic Museum in the town of Fano, Italy. During the Brownings' visit to the seaside town in 1848, they viewed the painting several times in the little Church of San Agostino. Browning was compelled to write an account of the occurrence in his popular poem, "The Guardian Angel: A Picture at Fano." 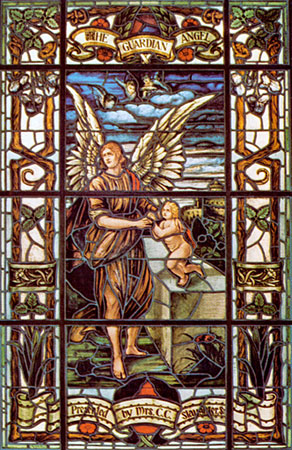 Excerpts from Robert Browning's "The Guardian Angel: A Picture at Fano"

Dear and great Angel, wouldst,
thou only leave
That child, when thou hast
done with him, for me!

O world, as God has made it!
All is beauty:
And knowing this, is love, and
love is duty.
What further may be sought for or declared?

We were at Fano, and three times we went
To sit and see him in his chapel there,
And drink his beauty to our soul's content
--My angel with me too. . . .