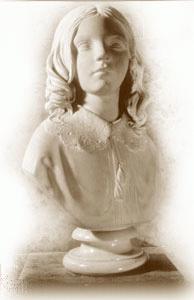 Robert Wiedeman Barrett Browning, the Brownings' only child, was born in Casa Guidi in Florence, Italy on March 9, 1849. Elizabeth Barrett Browning had suffered three miscarriages prior to his birth; that her pregnancy with Pen was successful was attributed to the fact that she discontinued the use of laudanum, which had been prescribed for her illness. She described him as "so fat and rosy and strong that almost I am sceptical of his being my child."

"Wiedeman" was his paternal grandmother's maiden name. Sadly, she died in London the week after her grandson was born, completely unaware of the fact of his birth, which grieved Robert very much. Robert and Elizabeth named the baby in her memory, and it was from her name that the boy obtained his nickname. As the child began to speak, his best efforts at articulating this name came out as "Penini" and "Pen," and the latter simply stuck.

Childhood
He grew up the only child of literary geniuses--educated at home, traveling to France and England but living mainly in Italy (Florence, Siena, and Rome). Elizabeth wished to raise him in an enlightened fashion, exposing him to all aspects of the arts and dressing him in an androgynous manner. This marble image of Pen was created by Alexander Munro when the boy was ten years old. Although the Victorians often dressed boys in velvet, lace, and long curls, it was unusual to see this in a child above five years old. The issue of dress was one of the few points of contention between Robert and Elizabeth. Elizabeth died in 1861 when Pen was twelve years old, and one of Robert's first acts was to have the boy's hair cut and have him dressed in proper boys' clothing. Soon afterwards Robert removed himself and Pen from Italy because his grief would not allow him to spend time in Florence without his beloved Elizabeth. Pen's education was continued in London, where he entered Christ Church College, Oxford, but he lacked the intellectual determination of his parents and did not pass the required examinations.

Artistic Background and Training
Despite his extensive education in music and art, Pen seemed without ambition or purpose until John Everett Millais, the Pre-Raphaelite painter, suggested to Pen that he had a talent for sculpture and painting. The young Browning studied with Auguste Rodin in Paris, and Jean-Arnould Heyermans in Antwerp, Belgium. Although he gained considerable respect, Pen Browning never became part of the British art establishment. He tended to paint very large canvases which have not survived well. His favorite sculptural subject was the female nude and this offended the taste of the more prudish Victorians.

His Life
In October 1887, Pen married an American heiress, Fannie Coddington (1853 - 1935), whose father was a wealthy metal merchant. The marriage was the renewal of an old romance, but in the end the couple parted again and lived separate lives. It did, however, allow him to buy and restore Palazzo Rezzonico, one of the great palaces on the Grand Canal in Venice. Pen and Fannie lived together in Italy for approximately two years, until Robert Browning's death in 1889. There were no children from this marriage.

By 1887 Pen had rediscovered his love for Italy and lived there for most of the rest of his life. He had more or less abandoned his career as an artist but continued to paint for pleasure and produced some excellent portraits of his father. Eight of Pen Browning's paintings, including three portraits of his father, can be seen at the Armstrong Browning Library.

It was on a visit to Palazzo Rezzonico in 1889 that Browning died in Venice. A few years later marital problems caused the palace to be sold; it is now the Venetian Museum of Baroque Art.

Pen showed great solicitude for his elderly aunt, Sarianna Browning, and for the old servants who had cared for him as a child. They all had a home with him in Venice, then Asolo, and Florence. He loved animals, pythons, and dachshund dogs, among others.

His sight caused him problems and this greatly limited his ability to paint. Portly and cheerful, he enjoyed the Italian good life, living chiefly in Asolo where he is still remembered fondly. He invested in a lace factory to bring employment to the hillside town. As a young man Dr. A. J. Armstrong, founder of the Armstrong Browning Library, visited Pen in Asolo and Florence in 1909. Pen died at Asolo in 1912 and was buried in the local cemetery.

After His Death
Pen's will could not be found, and as he had no descendants, his estranged wife and his sixteen Barrett cousins claimed his estate--including Casa Guidi and all the Browning treasures. Although the estate was not in good order, the tragedy that followed could perhaps have been avoided. Apart from what was inherited by Fannie Browning, everything Pen possessed was sold at auction during a six-day sale at Sotheby's in London in 1913.

Many of the Browning materials sold in 1913 are now in major collections, private hands, or untraceable. If it had not been for Dr. Armstrong at Baylor, who secured the services of a Sotheby staff member to prepare a duplicate record of the sale, matters would have been far worse. From 1913 until his death, Dr. Armstrong began to reassemble whatever he could trace of the Browning heritage in order to add it to his Baylor Browning collection. This work still continues.

Fannie Browning died in England in 1935 and is buried there. She often gave away precious Browning materials almost on a whim. She also had her husband's body removed and reburied in the new Protestant Cemetery in Florence (his mother's grave is in the old Protestant Cemetery).

Casa Guidi was preserved for nearly a century by the foresight, investment, and generosity of American Browning lovers; and it is now owned by Eton College in Windsor, England. It is maintained as a small Browning museum and a holiday apartment.