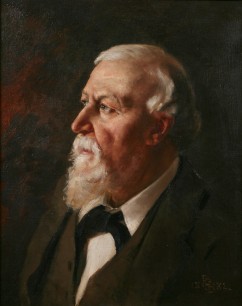 Early Years and Marriage
From his birth on May 7, 1812, Robert Browning was acknowledged to be a very clever child; he had aspired to be a poet from his earliest days in the south London village of Camberwell. His parents supported him in this endeavor until he was in his thirties and married Elizabeth Barrett. He was always true to his vocation but received little public appreciation until the publication of The Ring and the Book in 1868-1869, when he was in his fifties. This 21,000-line, highly original narrative poem challenges all but the most dedicated of modern readers. Nevertheless, the poem contains passages of great beauty and psychological insight. The final lines of the first book are a tribute to his wife: "O lyric Love, half angel and half bird...."

His fifteen-year marriage was spent almost entirely in Italy because the warm climate eased his wife's lung condition. After her early death in 1861, he returned to London with his twelve-year-old son and never visited Florence or Rome again. As an older man he enjoyed long autumn holidays in Venice, and it was during one of these visits that he died in his son's magnificent Palazzo Rezzonico on the Grand Canal.

Poetry
Browning wrote more poetry than almost any other English poet, all wonderfully intense and original and of an uncompromisingly high standard. He never thought of "retiring"; his last poems were published on the day of his death, December 12, 1889. He was remarkable not only for his creative but also his social energy. Nearly all his life was spent in his native London where he was well known as an entertaining dinner party guest and social personality--rather an unusual role for a great philosophical poet.

His was an encouraging voice amid the anxiety and spiritual dismay that followed the scientific revelations of the nineteenth century. This is not to say that he was blandly optimistic, as he is sometimes portrayed. He wrote fully about the world's cruelty and vice and was quite frank that he had himself had no divine revelation. Nevertheless, he resolved to hope rather than to doubt; and this determined hopefulness remains a comfort and inspiration for many.

Somewhere, below, above,
Shall a day dawn—this I know—
When Power, which vainly strove
My weakness to o'erthrow,
Shall triumph. I breathe, I move,

I truly am, at last!
For a veil is rent between
Me and the truth which passed
Fitful, half-guessed, half-seen,
Grasped at—not gained, held fast.

Later Years and Death
Today, Robert Browning is well known to the general public as the writer of the lines "Grow old along with me! / The best is yet to be..." (from "Rabbi Ben Ezra") and "Oh to be in England, / Now that April's there..." (from "Home Thoughts from Abroad"). To some, he is also known as the hero of the play The Barretts of Wimpole Street; but to the serious Browning scholar, he is a literary figure with ill-defined edges. On December 31, 1889, Robert Browning was buried in London's Westminster Abbey in Poets' Corner among the very greatest figures in British history.