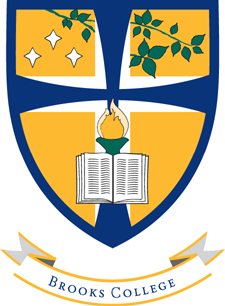 In the College Crest (also known as the Coat of Arms) one finds a large cross in the middle that symbolizes the Christian commitment of Baylor University and Samuel Palmer Brooks. A group of three stars in the upper-left quadrant represent the Trinity (Father, Son and Holy Spirit) that inspires and guides the lives of the Baylor community. The bright white stars are inspired by S.P. Brooks' attitude in moments of tragedy and turmoil. As Brooks once said, "if night never came, the stars would never shine." The torch of the Coat of Arms symbolizes life, zealousness, truth and intelligence-all characteristics embodied in the life of S.P. Brooks. In his immortal message to the graduating class of 1931, S.P. Brooks famously said, "To you seniors of the past, of the present, and of the future, I entrust the care of Baylor University. To you I hand the torch." The open book with seven pages reminds residents of the College to be a scholarly community and reminds us that S.P. Brooks was one of seven children and the seventh Baylor president. The vine symbolizes growth that students experience while at Baylor and reminds us of the explosive maturation of Baylor during Brooks' leadership as president from 1902 to 1931.

The Making of the College Crest

The Coat of Arms for Brooks College was developed over the course of several months in the early part of 2006. The Campus Living & Learning Student Advisory Board, numerous student focus groups and former Brooks Hall residents participated in conversations about the development of a the Coat of Arms which represents Brooks College. Coats of arms are a tradition of many residential colleges and are typically representations of community values and purpose. Throughout the process, Baylor's architectural firm created and refined dozens of these concepts inspired by Baylor students. In April of 2006, the last residents of Brooks Hall voted to determine the final Coat of Arms for Brooks College.