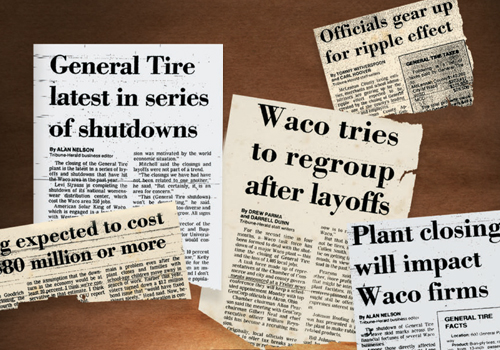 When the Waco General Tire & Rubber Plant celebrated its 40th anniversary in 1984, the size of the plant had grown from the original 233,000 square feet of manufacturing space to 49 acres under roof on 139 acres of land. There was a staff of more than 1,400 personnel with an annual payroll of $42 million and an estimated expenditure in the area economy of $18 million monthly.

However, in November 1985, drastic changes in the automobile industry and competition from imports caused General Tire to close the Waco plant. The loss devastated the regional economy and put nearly 10% of Waco’s manufacturing workforce out of a job.