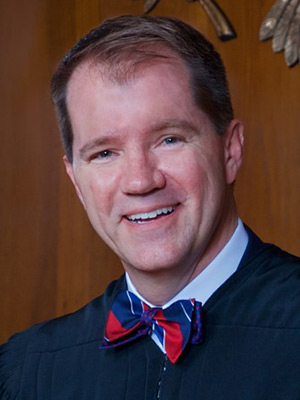 Raised by a heroic, widowed mom who never finished high school, Judge Willett is his family’s first college graduate, earning a triple-major BBA in 1988 from Baylor University and then three degrees from Duke University: JD with honors (1992), MA in political science (1992), and LLM in judicial studies (2016). After law school, he clerked for Judge Jerre S. Williams on the U.S. Court of Appeals for the Fifth Circuit and then practiced law at Haynes and Boone, LLP before entering public service.

Judge Willett publishes widely and speaks frequently throughout the country, holds academic appointments at various law schools, and has a long history of nonprofit board service on the local, state, and national levels. His honors include Jurist of the Year, Distinguished Alumnus and Outstanding Young Alumnus of Baylor, and the Pro Texana Medal of Service.

A former bull rider and professional drummer, Judge Willett was named the Tweeter Laureate of Texas in 2015. He is the namesake for Don R. Willett Elementary School, which will open in 2022 barely a mile from where he grew up. He and his wife, Tiffany, a Baylor Alumna by Choice, are members of Austin Stone Community Church in Austin. They have three children: Jacob, Shane-David, and Genevieve.