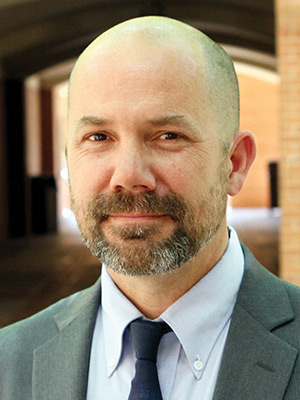 Dr. Brian Raines serves as professor of mathematics and associate dean for research and strategic planning in the College of Arts & Sciences at Baylor University. He joined Baylor’s faculty in 2002. As a research mathematician, he works on problems related to chaotic systems using techniques from topology, a branch of pure mathematics. He is also interested in applications of topology to non-deterministic dynamical systems that arise in mathematical economics.

Dr. Raines travels extensively to work with collaborators in the UK, Italy, Croatia, and New Zealand, and he has published articles in such journals as Advances in Mathematics and Algebraic and Geometric Topology. He is a board member of Educational Advancement Foundation, a charitable board that supports mathematics education, and Acton Academy Waco, a private, faith-based school. He has served on dozens of taskforces and committees during his tenure at Baylor. Notably, he served as chair of the Faculty Senate at Baylor from 2019 to 2020, and before that he was on the leadership team of the faculty committee that re-designed the core curriculum of the College of Arts & Sciences.

Dr. Raines and his wife, Bevin Barker Raines, are active members of St. Alban’s Episcopal Church in Waco, where he has served as a Sunday school teacher. They have three sons: Sam, Milo, and Max.