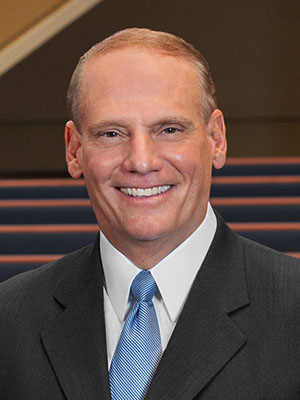 Mr. Mark E. Lovvorn is chairman and CEO of Providence Bancshares Corporation and chairman of Providence Bank of Texas, with locations in North Texas. As a banking veteran with a federal bank regulation background, he has been the founder of de novo community banks as their chief executive.

Mr. Lovvorn received BBA (’76) and BAcc (’77) degrees from Baylor and is a CPA and certified fraud examiner (CFE). He is also a member of AICPA and ACFE. For 25 consecutive years, he has served Texas Baptists through the boards of HighGround and is the current audit chair of HighGround Trust. He also serves as chairman of Marketplace Ministries Foundation. Mr. Lovvorn is chairman of the finance committee and the planning and development committee of First Baptist Church of Dallas, which oversaw the $200-million re-creation of the church’s downtown campus and which continues to direct campus expansion projects. He and his wife, Patty (BS ’77) are active in the church’s varied ministries. A former deacon chairman, he also enjoys sharing the message of Christ with inmates in the Dallas County Jail.

The Lovvorns are active members of the advocacy board for Baylor’s Louise Herrington School of Nursing and have established an endowed scholarship in nursing. Mr. Lovvorn continues the study of financial regulation through the Juris Master degree program of Florida State University College of Law and also enjoys programs of biblical study through SEBTS. He frequently speaks to adult church groups about protection from elder financial fraud. The Lovvorns have four children: Ben (JD ’07), Jason (Baylor football, BBA ’08), Tricia (BA ’10)—all of whom serve in vocational Christian ministry—and Justin, a graduate student basketball player at Oral Roberts University. They also have nine grandchildren.