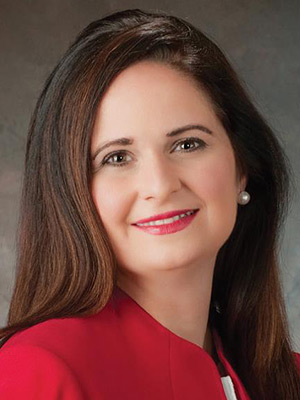 Judge Jennifer Walker Elrod serves as a circuit judge of the United States Court of Appeals for the Fifth Circuit, with chambers in Houston, Texas. Prior to her confirmation, Judge Elrod was appointed and twice elected judge of the 190th District Court of Harris County, Texas, where she spent more than five years presiding over more than 200 jury and non-jury trials.

Judge Elrod is a Phi Beta Kappa graduate of Baylor University, which has recognized her as an Outstanding Young Alumna. While at Baylor, she was named Outstanding Graduating Senior in the Honors Program. She graduated cum laude from Harvard Law School, where she was an Ames Moot Court finalist and senior editor of the Harvard Journal of Law & Public Policy. After law school, Judge Elrod clerked for the Honorable Sim Lake of the United States District Court for the Southern District of Texas. Before serving as a judge, she was in private practice, focusing on civil litigation, antitrust, and employment matters.

Judge Elrod served pro bono as the first general counsel of Communities in Schools-Houston, one of the largest dropout prevention organizations in the country, and as chair of the board of Lone Star Legal Aid, a major legal services provider for the indigent. Judge Elrod also is a former chair of the board of the Texas Center for Legal Ethics. She is the recipient of the Texas Center for Legal Ethics 2015 Chief Justice Jack Pope Professionalism Award. In 2011, she was the M.D. Anderson Visiting Public Service Professor at the Texas Tech University School of Law.

Judge Elrod met her husband, Hal, while both attended Baylor University. Now married for more than 30 years, they have two daughters, Elizabeth and Catharine. Their younger daughter is a sophomore at Baylor.