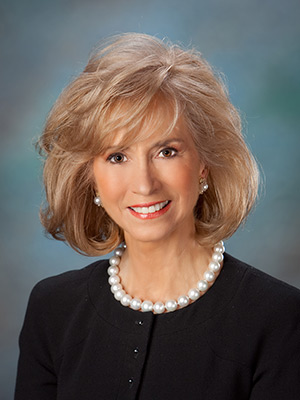 Mrs. Julie Turner is a longtime community volunteer who has served on nonprofit and charitable boards. She served on the board of trustees for Dallas Baptist University from 1997 to 2006 and from 2010 to 2015, serving as chairman from 2003 to 2004. She also currently serves on the boards of the Baylor Health Care System Foundation and the Texas Sports Hall of Fame and is a past board member of several charitable boards, including The Salvation Army, Children’s Cancer Fund, and Senior Source. She received the Baylor University Woman of Distinction Award and the Dallas Baptist University Ruth Award. She is a Philanthropy in Texas honoree and a lifetime member of the Texas PTA.

Mrs. Turner served as a full-time instructor at Baylor after graduation. She also was an instructor at McLennan Community College, San Jacinto College, the University of Houston, and Mesa Community College before joining her husband, Jim Turner (BBA ’69), to help grow their business, JLT Beverages (Dr Pepper Bottling Company of Texas) into the largest bottling company in the United States. The couple sold the franchise in 2006, but she continues to serve as president of Turner Holdings, with investments in auto dealerships, real estate, insurance, and banking.

As a member of Baylor’s Medallion Fellowship, R.E.B. Baylor Society, Women’s Council, and Women’s Athletic Council, Mrs. Turner and her family are among the top financial supporters of Baylor and have supported the University in many ways, from the Turner Riverfront Athletic Complex to the Julie and Jim Turner Mezzanine in the Paul L. Foster Campus for Business and Innovation. The Turners are members of Park Cities Baptist Church and have two daughters and two grandsons.