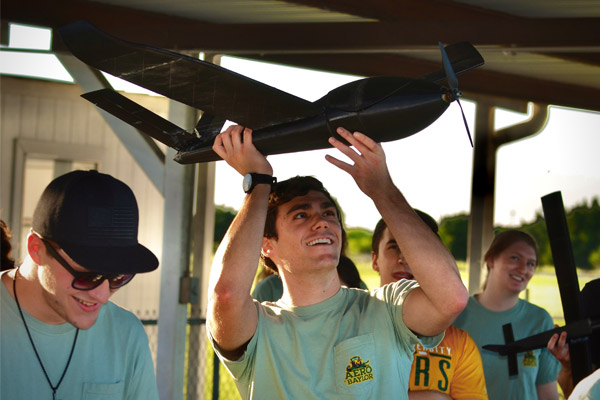 Baylor’s premier aerospace engineering club, Aero at Baylor, has its eyes in the clouds—and for good reason. The mission of the student organization is to introduce aerospace engineering to the next generation of engineers in the Baylor and greater Waco community and to inspire their students to shoot for the stars… or even Mars.

The group has been steadily growing since its revival last year—it features 60 active members, three different competition teams and hosts events and meetings that attract upwards of 150 students.

Who are Baylor’s aerospace-minded students?

"Most of us are mechanical engineers, but not all of us," project manager for the club's 3D Printed Aircraft Team, Josh Clark said. "We have club members who are business majors or other various things, like biomedical, who just enjoy aviation, aeronautics, aerospace—that’s what makes Aero at Baylor so unique."

This summer, the club's 3D Printed Aircraft Team competed in the 6th Annual 3D Printed Aircraft Competition, hosted by UT Arlington. Baylor pulled off the win, beating out teams that included Stanford, Virginia Tech, San Diego State and others. Additionally, the group set the record for longest duration flight in the seven-year history of the competition, and won a $1000 prize to support future club endeavors.

The group is filled with talented students who’ve received internships at aerospace companies across the country including SpaceX, Lockheed Martin, L3Harris, and Boeing. The club’s president, Annika Moser, interned over the summer at SpaceX in McGregor, Texas, and is spending the fall in Florida as a launch operation intern for Falcon 9.

"It’s incredible because it was another Baylor grad who helped me get this opportunity in Florida," Moser said. "He told me that we need more Baylor Bears in Space —and we believe that Aero at Baylor helps create those opportunities. Now, I’ll hopefully be able to help students in the future receive similar experiences."

Numerous Baylor faculty contribute to the organization, including Dr. Anne Spence, Dr. Trevor Fleck and many others.

"Dr. Spence is the greatest. She is such a good example of what it means to be a Christian in the engineering world," Clark said. "She's a great example of a successful female engineer (it’s not always easy in STEM fields) and—she’s just a trailblazer. We love her and she supports us so much."

The organization is also excited to witness how Baylor is continuing to grow, especially as an R1 Institution. This last spring, Aero at Baylor’s officers helped advocate for the school to start an aerospace engineering concentration – it was passed with a unanimous yes vote last spring.

Now, the group has its eyes set on June 2023 as they prepare for the Intercollegiate Rocket Engineering Competition (IREC) in New Mexico. Aero at Baylor is working toward raising $20,000 to build a rocket upwards of eight to 20 feet tall with target altitudes of 10,000 ft. above ground level.

"My hope for Aero this year is that any student—business major, mathematics major, physics, elementary education—whoever wants to join feels welcomed into the space at Aero Baylor," Moser said. "Diversity is super important, especially in engineering aspects—all people are welcome to be a part of the group! We want to continue to spread the joy of space exploration and flight."

You can learn more about the organization and follow along in their endeavors at their Instagram page.
Are you looking for more News?
All NewsArchives