Commemorating Emancipation from Texas to the Nation: Faculty Voices on Juneteenth 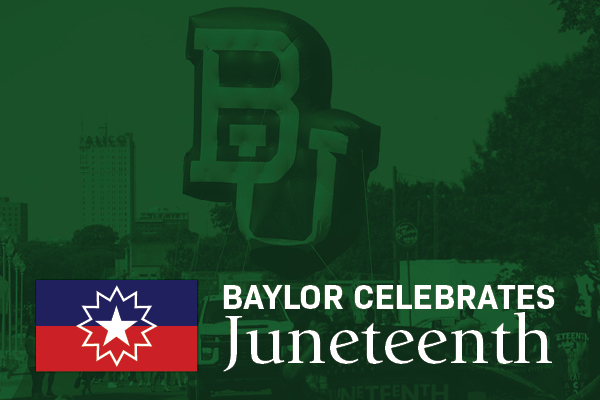 While families and communities across Texas have celebrated Juneteenth for generations, 2022 marks the first time that many across the nation will observe it as a federal holiday. Last year for the first time, Juneteenth was declared a national holiday. As Baylor commemorates Juneteenth, Baylor faculty and staff will again join partnerships within the community and share in events that highlight the meaning of freedom and the struggle to become a more perfect union.

Telling the story of the original Juneteenth in 1865 provides a starting point. The Waco History app, a project created by Baylor Institute for Oral History, tells the story: over two years after the Emancipation Proclamation in 1863, news of their liberation did not reach the enslaved in Texas until June 19, 1865, when Union troops arrived in Galveston to spread the news across the state. While many slave-owners continued to work to hide the news, Juneteenth heralded emancipation of all enslaved Americans. For generations thereafter, Juneteenth was celebrated across Texas as families, many merely a generation or two removed from legalized slavery in the U.S., celebrated on June 19, long before it became recognized by the state in 1979.

“I was born in 1968. I remember when it became a holiday, but we celebrated it before it became an official holiday,” Mia Moody-Ramirez, Ph.D., professor and chair of journalism, public relations and new media remembers. “Juneteenth was a wonderful time to gather with family and enjoy delicious food and family togetherness. Our grandparents and parents shared the meaning of the event and we were proud of the holiday.”

A native of Bryan, Texas, and the granddaughter of sharecroppers, Moody-Ramirez’s family made sure she understood the day’s meaning. It wasn’t until she was older that Moody-Ramirez discovered that other states were often unaware of the celebration with such deep Texas roots.

Stephen Reid, Ph.D., recently named Baylor’s vice provost for faculty diversity & belonging and longtime professor of Christian scriptures in Baylor's Truett Seminary, grew up in the Midwest. While his family shared the meaning of Juneteenth with him as a child, moving to Texas in 1990 deepened his appreciation for the holiday — it made the day a moment “not from a story far away, but in some sense a local story and a real turning point in history right around the corner.”

Reid’s theological disciplines deepen his appreciation for the meaning of Juneteenth.

“In the Exodus story, from the time they start the plagues until the time they get out of Egypt, it's a significant amount of time. There are troubles and deaths and those sorts of tragedies,” Reid says. “When we think of the length of time it took to get the word to Galveston, our hearts are sad. But on the other hand, we were uplifted because the word went forth even to Galveston. In the African American church, there's a saying that ‘God is always on time.’ And so even though it seemed later than we wanted, God and deliverance were very much on time in that June day.”

As Baylor commemorates the holiday in 2022 (see below for details), Reid sees the University as a meaningful place and community to consider its meaning.

“Part of the joy of being at a place like Baylor is that we are not afraid of our history. We are willing to look at our history pretty clearly, and at the same time, be assured of God's grace and an open future,” Reid says. “History does not frighten us; rather, it gives us resolve to move forward in Christian ministry. Baylor, as a Christian university, is well-positioned not only to commemorate Juneteenth, but to have it a covenant time for us to think through what God is asking us to do institutionally in building a better future.”

This year, Baylor will again participate in the annual Juneteenth Parade, organized by the Central Texas African American Chamber of Commerce. The parade begins at 10 a.m. on Saturday, June 18, and takes a path that begins near City Hall and culminates in East Waco. Later that afternoon, the University will participate in Juneteenth Family Fun Day, with numerous community organizations celebrating African American heritage and independence beginning at 4 p.m. at Brazos Park East. Baylor will also host this year’s Mr. and Miss Juneteenth Scholarship Pageant June 16-17 at Waco Hall.
Are you looking for more News?
All NewsArchives