Teaching 9/11 to the Next Generation 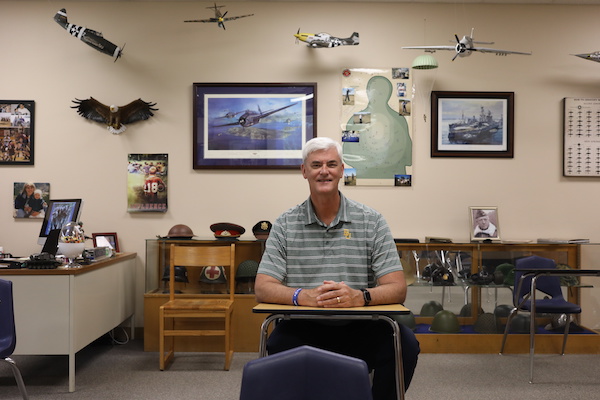 The morning of September 11, 2001, Baylor's First Gentleman Brad Livingstone spent the drive to the Vanguard College Preparatory School campus in Waco listening to the radio, preparing for another day of teaching history to Vanguard's students. Baylor President Linda A. Livingstone, Ph.D., was associate dean of graduate programs in the business school at the time and their daughter Shelby was just four years old. A radio report of a plane hitting the tower jogged his brain back to World War II – his academic area of expertise – when a plane crashed into the Empire State Building due to fog. At that moment, the incident seemed little cause for any immediate concern for him or his students sitting halfway across the country. As the morning's events unfolded, Livingstone registered that this was a watershed moment, one that he now teaches to a population of students that were not alive on that tragic day.

In this Q & A, Livingstone shares his experiences of that fateful morning and the challenges of teaching 9/11 as we approach the 20th anniversary of the attacks on New York City, Washington, D.C. and Pennsylvania.

Reflecting back on that day, where were you and what do you remember?

"I remember pulling into the Vanguard campus where I'm teaching now. On the radio, it said, "We're getting reports that a plane has flown into the World Trade Center." And of course, to me, since I teach a class on the history of World War II, all things relate to World War II. Immediately, I thought of the time when a bomber – I think it was a B-25 bomber – accidentally flew into the Empire State Building during World War II because it was really foggy.

"I don't remember what I was teaching, I know I was teaching U.S. history. I don't remember the exact subject matter. I just said, 'Students, class is over, follow me.' We roamed the halls to find a TV. We're all there, maybe 40 students, and they kept piling in. We're watching it and you could have heard a pin drop. Nobody knows what's going on, but we see the fires. Then I remember seeing the building fall, the first one fall. We were just in shock, absolutely in shock."

How do you approach teaching students who were not alive during this event but have parents or older siblings that have a distinct memory of that day?

"God works in mysterious ways, and we all know that. Back on that day, again, I'm teaching the World War II class, so everything I'm teaching to my current students –  none of them were alive. I wasn't even alive during World War II. Everything is a part of history, but that particular event, everyone you talk to, they know exactly where they were when they heard about the towers. They knew where they were.

"This is what I mean by God works in mysterious ways, though. Months before that, months before 9/11, I had already contacted all of my guest speakers for World War II. I don't remember if it was the next day or the day after 9/11 hit, Dr. Tom Parrish was our guest speaker in my World War II class, and he was at Pearl Harbor. He was an unbelievable speaker. He'd probably been in my classroom maybe 15, 20 times, talking about his experience at Pearl Harbor on December 7, 1941. Every time he would speak, he would say, 'Everyone who was alive at that time, knows exactly where they were on December 7th, 1941 when they heard that Pearl Harbor had been attacked and we were at war.' So when he came in, the first thing he said to my students was, 'Welcome to your Pearl Harbor.' He equated Pearl Harbor to 9/11, and he talked about the parallels between 9/11 and what it was like on December 7th, December 8th, December 9th of 1941.

"Here we were, just a few days after 9/11. It was just absolutely brilliant what he had to say, because most of us can't really relate to Pearl Harbor, because we weren't alive then. But all of us could relate to 9/11, because we were experiencing it right then and there. He really made that part of history come alive for us, because he was actually saying, 'Now you know what we felt like,' especially the unknowns, what's going to happen now? We didn't know what was going to happen at that time. So I'm actually able to share that story with my current students now, and to show some video of Dr. Parrish, as he explains what he experienced at Pearl Harbor. It's a great parallel between this and hopefully a connection that my current students can make back to 2001."

How have students responded to learning about these moments in recent history, particularly one like 9/11, where there is so much news footage and coverage of the events happening?

"I have found that my students are very well versed on the events of 9/11. Even though they weren't alive at that time, they have been taught. Of course they grew up with images of the burning buildings and the wars that took place afterwards. So that's always been a part of their life. I actually asked my students last week in the World War II class what they could tell me about 9/11, because every school is going to have a remembrance assembly for that, including Vanguard. I was actually pretty surprised, pleasantly surprised, on their overall knowledge of what went on at 9/11 and what went on afterwards, especially in the wars. That's something that, even though it isn't as far in the past for many of us, my students have absolutely zero recollection of, obviously, because they weren't born yet when it happened. But they're very well versed on what did happen. I'm very thankful for that.

"One of the things that we do in my class is actually training them to identify veterans when they're out around town. You'll notice a lot of veterans wear their hats, including the ones that fought in Afghanistan and Iraq. I teach my students to identify them and see them, and go up to them and thank them for their service to our country. Every Monday, I go around and ask if any of them were able to thank a veteran that weekend. We just got that started. I want them to know that these veterans need to be honored. But I also want the veterans to know that the younger generation has not forgotten them."