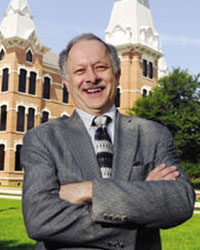 With his primary interest in the era of the Old Testament, Lynn Tatum has served as a staff member on numerous excavations in Israel and Syria. He has been recognized with several awards, fellowships and international grants from such organizations as the Institute of Archaeology, Zion Research Foundation, National Council on U.S.–Arab Relations and the Southwest Commission on Religion. Tatum has published many articles and presented papers on a variety of topics, including King David, King Manasseh, the Book of Chronicles, the Patriarchal Period and current religious and political developments in the Middle East. His most recent publication focused on academic freedom at religiously affiliated colleges and universities. Tatum serves as president of the Texas American Association of University Professors and is a member of the American Schools of Oriental Research, the Society of Biblical Literature, the National Association of Baptist Professors of Religion, the Texas Association of Middle East Scholars and the Texas Council on U.S.–Arab Relations.