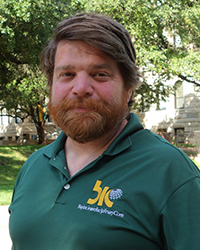 Dr. Perry studied History and Communication during his undergraduate studies and Communication in his MA studies at Baylor. His PhD from Georgia State University is in Communication with a focus on Rhetoric & Public Address. He studies race and racism in the United States with a particular focus on the ways in which anti-black racism manifests in the public sphere through political, religious, and popular discourse. He has published in Rhetoric Society Quarterly, the Southern Communication Journal, Argumentation & Advocacy, and other outlets. His forthcoming book, Rhetorics of Race and Religion on the Christian Right: Barack Obama and the War on Terror with Lexington Books examines the ways in which President Obama faced criticisms based on his race and religion through his candidacy as and his presidency. He coordinates the World of Rhetoric sequence in the BIC and the Graduate Fellowship in Interdisciplinary Rhetorical Studies. He teaches World of Rhetoric I &II, Social World I, A Capstone on The Allegory of the Cave and Contemporary Film, and courses in the Communication Department.