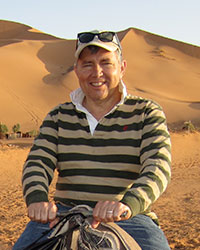 
Dr. Mark Long, Director of Middle East Studies and Associate Professor in the Honors College at Baylor University, specializes in contemporary Islamic fundamentalism and the Arab-Israeli conflict. A former Air Force intelligence analyst, Dr. Long has traveled repeatedly throughout the Middle East and has lectured extensively on Middle East politics and religion, as well as on the Persian Gulf War. He is the author of the Saddam’s War of Words: Politics, Religion, and the Iraqi Invasion of Kuwait (University of Texas Press, 2004), nominated for the British Society of Middle East Studies prize. Additionally, he has published articles on Islam, jihad, and international terrorism. He has been a frequent guest on radio and television programs to discuss war in the Middle East. His current research focuses on the ideology of al-Qaida and the formation of a national security strategy to confront it. Most recently, the Kennedy School at Harvard University has published his collaborative work on ways to delegitimate the narrative of al-Qaida and its offshoot, ISIS.

A Ph.D. of Baylor, Dr. Long holds undergraduate and graduate degrees in English, religion, Greek, and national security affairs. His doctoral work focused on political Islam, with a sub specialty in religion and American culture. Before coming to Baylor, Dr. Long served eleven years on active duty as a Middle East analyst and as an instructor at the Air Force Academy where he taught Arabic and English literature. He is now a major in the Air Force ready reserves. Dr. Long is an honor graduate of Air Force Officer Training School, a distinguished graduate of the Armed Forces Intelligence College, and a distinguished graduate of the Naval Postgraduate School. He was selected for the National Military Intelligence Award by the Air Intelligence Agency and for the Outstanding Academy Educator Award at the Air Force Academy. He was also selected as a post-doctoral fellow at Harvard University.