After cheering for mascot-less athletic teams, Baylor students and alumni decided it was time for a change. During chapel on Oct. 2, 1914, former student George Baines Rosborough proposed a contest to come up with a mascot “around which to wreathe the sentiment of the school in poems and songs and yells, and in college customs which add so much to college life.” Nearly 24 entries were received by the contest’s Dec. 9 deadline. The subsequent vote among the student body resulted in the announcement Dec. 12, 1914, of the bear as the winner, having garnered 206 of the 406 ballots cast. However, it would be a few years before a live bear appeared. 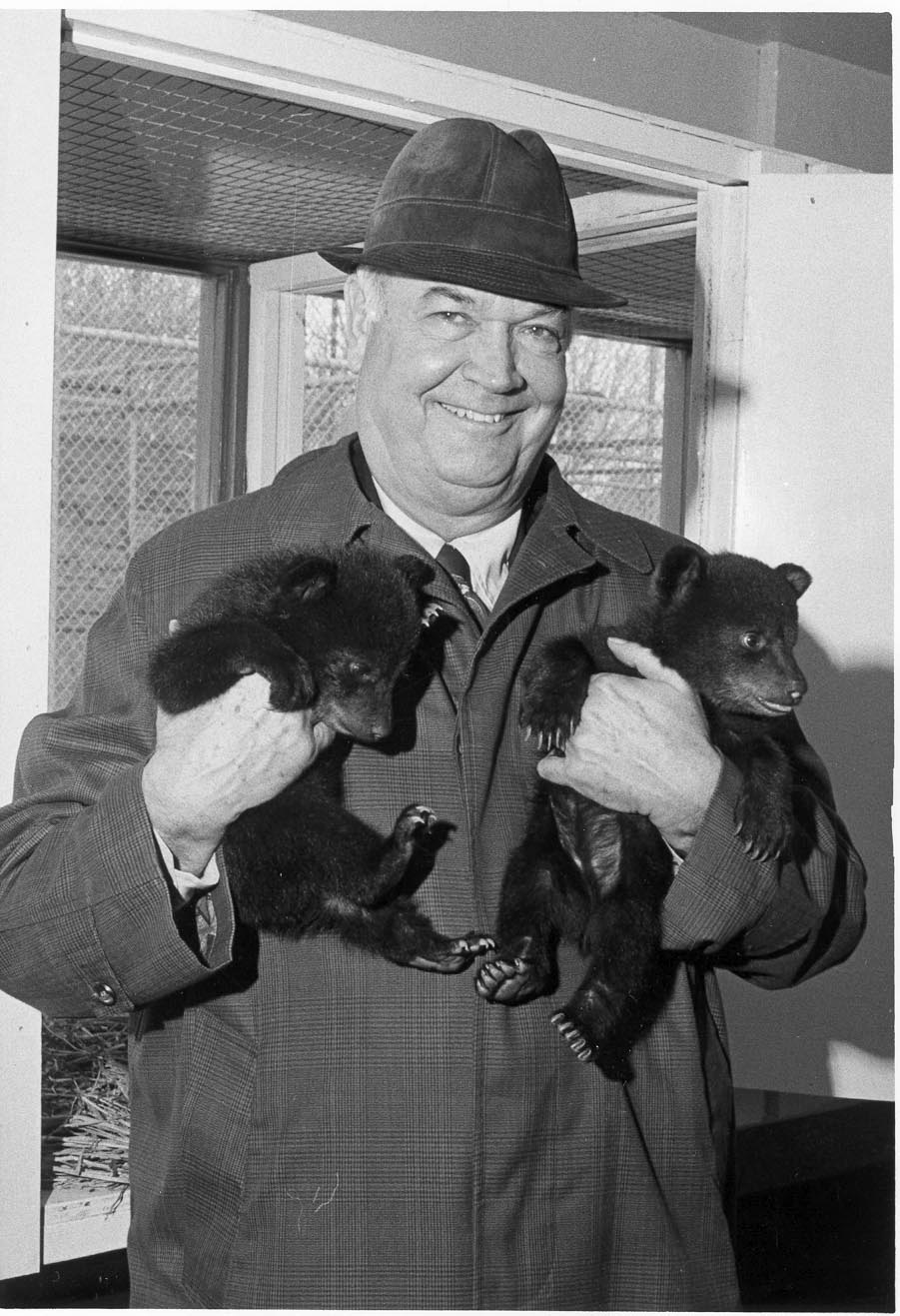 The creation of Camp MacArthur in 1917 brought thousands of U.S. Army troops into Waco to prepare for combat in World War I. Members of the 107th Engineers of the Army’s 32nd Division were stationed at the camp, and they acquired a live bear as a mascot. When the Baylor Bears played Texas A&M in football on Nov. 10, 1917, at Waco’s Cotton Palace grounds, members of the 107th Engineers decided to put their bear in a truck, take him to the football stadium and parade him around—the first time a live bear attended a Baylor event. The bear was taken back to the camp. The 107th Engineers received orders on Jan. 13, 1918, to depart from Waco, and they decided to donate their furry pal to Baylor. The bear, referred to as both Ted and Bruin, was kept in the small zoo on the Cotton Palace grounds and brought out occasionally for Baylor events.

During the next 14 years a succession of live bears served as Baylor mascots, some given to the university by alumni. A few were housed at the zoo or elsewhere in Waco, while others made their home on campus.

In 1932, financial problems forced the owners of the Cotton Palace to close the facility. A bear housed at the facility, a 200-pounder who had begun his life performing in an animal show, ended up in the possession of Baylor student Bill Boyd on May 18, 1932, and soon was living in the back yard of Boyd’s house near campus. Named Joe College, he was formally introduced to the student body at the first home football game in 1932.

To feed Joe, Boyd sought donations from local grocery stores and restaurants as well as from student dining halls on campus, and the bear’s weight grew to about 500 pounds. When it became inconvenient to keep the large bear in Boyd’s backyard, members of the Baylor Chamber of Commerce offered to build a place for Joe on campus, one of a number of acts which began the long tradition of the Chamber feeding and caring for Baylor’s bears.

By 1940, age was beginning to slow down Joe College, and he was retired from active mascot duty. The Bentsen brothers of Texas (father and uncle to Lloyd Bentsen, Texas’ U.S. senator from 1971-1993) donated Joe College’s successor, named Little Joe, to Baylor.

1974 marks the beginning of the tradition of referring to the bears as “Judge” followed by a surname. The name “Judge” held particular significance because current Baylor President, Abner V. McCall, was known by the students as Judge McCall because of his service as a Texas Supreme Court Justice. The name “Judge” was also significant because the university was named for Judge R.E.B Baylor, who was a member of the Texas Republic Supreme Court and served as a US district judge for a quarter of a century.

Around the time of Little Joe’s arrival, the Baylor Chamber of Commerce assumed full responsibility for the training and care of the bear mascots. The Baylor Chamber led the fundraising drive to help build the first modern home for the bears, the “Bear Pit,” which was dedicated May 19, 1945. Located along the banks of Waco Creek along what is today know as M.P. Daniel Esplanade, it contained a swimming pool and areas for walking and climbing.

The bears’ living quarters received at least four major renovations over the next 30 years. The Bear Pit was demolished to make room for the Steve Hudson Bear Plaza, dedicated at Homecoming in 1977. The Hudson family provided the lead gift in honor of their son who died while he was a Baylor student. Three times larger than the previous mascot facility, it featured a waterfall and AstroTurf.

The current facility, the Bill & Eva Williams Bear Habitat, dedicated at Homecoming in 2005 and named for the family that provided the lead gift, stands on the site of Hudson Plaza. The bears’ home provides natural landscaping with areas for roaming and enrichment by the animals and is currently licensed by the USDA as a Class C Zoo.

The Habitat continues to draw thousands of visitors who come to see Judge Joy Reynolds and Judge Sue “Lady” Sloan, the current Baylor bears, named after former university first ladies. Born in 2001 and 2002, Joy and Lady are biological sisters. They have lived on campus since they were cubs and will live out the rest of their natural lives with us.

Today the Bear Committee and Lead Team provide the best care available to our bears, which includes but is not limited to: in-depth meal planning with nutrition specialists; feedings twice a day, every day of the year; cleaning the habitat regularly; facilitating additional weekly off-campus enrichment, training, and exercise; developing educational curriculum, trainings, and site visits for community engagement and education; providing general maintenance and upkeep of the Bill & Eva Williams Bear Habitat; and monitoring and ensuring the overall health and well-being of the bears. These students are trained and mentored by animal care experts and also have Food Handler’s licenses, since the bears enjoy a wide range of fresh raw meats, fruits, and vegetables.

It’s hard to measure the deep meaning our bears have to the Baylor community. With hundreds of visitors a day to the Bill & Eva Williams Bear Habitat, our bears serve as a symbol of Baylor’s spirit and tradition. The most remarkable part of this tradition is the long-standing history of caring for live bears on campus. Generations of Baylor students and families are connected through this part of our story. The students who pass through the habitat on their way to class today are then connected to the generation before them who interacted and passed by our bears each day when they were students here, who then share a connection to the generation before them who too cared for and were connected to these living symbols of our purpose as an institution. The tradition of students caring deeply for one of the university’s most precious icons and partnering with the community in ways to educate and engage is a fitting illustration of what the Baylor experience is all about.