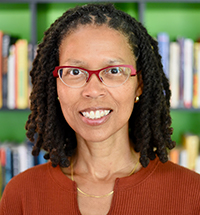 Born and raised in Nashville, Tennessee, Evie Shockley earned a B.A. at Northwestern University, a J.D. at the University of Michigan, and a Ph.D. in English literature at Duke University. She currently serves as professor of English at Rutgers University.

Shockley’s most recent book of poems is semiautomatic (2017), a finalist for the Pulitzer Prize and winner of the 2018 Hurston/Wright Legacy Award in Poetry. Her other volumes of poetry include the new black (2011), which received the 2012 Hurston/Wright Legacy Award, and a half-red sea (2006). She is also the author of the critical volume Renegade Poetics: Black Aesthetics and Formal Innovation in African American Poetry (2011). Shockley’s poetry and essays have been featured widely in journals and anthologies, including The Black Scholar, The Paris Review, Tin House, Furious Flower: Seeding the Future (2019), The New Emily Dickinson Studies (2019), and The Fate of Difficulty in the Poetry of our Time (2017). She serves as a contributing editor at Boston Review.

Shockley’s honors include the Lannan Literary Award in Poetry, the Stephen Henderson Award, the Holmes National Poetry Prize, and fellowships from the Radcliffe Institute for Advanced Study, Cave Canem, MacDowell, ACLS, and the Schomburg Center for Research in Black Culture of the New York Public Library.