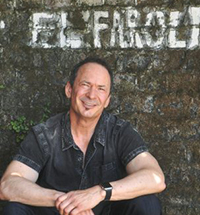 Forrest Gander was a Briggs-Copeland Poet at Harvard University before becoming the A.K. Seaver Professor of Literary Arts and Comparative Literature at Brown University, where he taught with his wife, the poet C.D. Wright, for more than twenty years. He lives and works now in Petaluma, California.

Gander’s other awards include the Whiting Writers Award, a Howard Foundation Award, and fellowships from the National Endowment for the Arts, the Guggenheim Foundation, and United States Artists. He serves as a chancellor of the Academy of American Poets.