Embracing the Past, Anticipating the Future
by Lois E. Myers
1954-2004 History

On Wednesday afternoon, March 3, 1904, seven women associated with Baylor University by employment, marriage, or both organized a women’s literary and social club and named it Baylor Round Table. In those days, Waco’s population was just over twenty-four thousand; Baylor had less than one thousand students; and teaching faculty, administrators, and staff numbered around forty. Less than twenty years had passed since Baylor at Independence merged with Waco University. The Victorian towers of Old Main and Georgia Burleson Hall had defined the campus skyline since the late 1880s. Carroll Science Building and Carroll Library and Chapel had been in use less than a year. Completing the main campus was Carroll Athletic Field, with its new grandstand for viewing football, baseball, and track. Female students living on campus roomed and dined in Burleson Hall, while male students lived in Houston and Cowden Halls about a half mile up Fifth Street toward town.

Round Table originated from the desire of women to continue their educations together in a setting that was informal, home-centered, and family-friendly. For its first sixty-four years, the club met twice monthly on campus or in members’ homes. The programs focused on literature, drama, music, art, history, and philosophy. Each and every member took her turn researching, writing, reading, and defending papers on the topics chosen for study. Gradually, program planners reached outside the club and beyond the campus, and book reviewers, local celebrities, and scholars of national renown rounded out club programs. 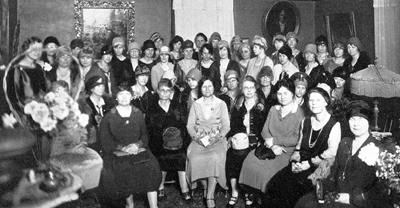 Mixing intellectual leadership and social life came naturally for Round Table. Three social traditions we enjoy today began early in the club’s history. The first gathering of guests for a musical Christmas in a beautifully decorated setting came in 1912, and marking club anniversaries every spring with a festive party dates to 1913. By 1937, the annual fall membership reception honoring new members and welcoming longtime members back after the summer break was well established.

Since then, two additional events have become annual traditions-the International Dinner and the Spring Luncheon and Style Show-and on these occasions, Round Table has applied its social expertise to causes beyond its own entertainment. In 1957, the club began hosting international students and faculty and their families to covered dish suppers, and since 1961, the international dinner has been a November event following the Thanksgiving theme in food, decoration, and song. In 1957, the club began hosting a luncheon for the last program meeting of the year, and in 1963, the executive board and social committee organized a style show to accompany the luncheon. Before long, the annual salute to spring grew into a popular social event among women in the entire Waco community.

The spring luncheon coincides with the establishment of the Round Table Scholarship, first awarded to a Baylor woman undergraduate in 1978. Profits from the spring style show and luncheon, a silent auction in the fall, memorial gifts, and a spring tour of homes supported the scholarship endowment through the years. The scholarship is but one example of Round Table’s historic response to opportunities to serve both on and off campus. In its early years, members raised money, dollar by dollar, for special projects. Their fundraising efforts furnished books for Carroll Library, assisted campus beautification projects, and supported the military during two world wars.