PowerPoint is common in college classrooms, yet slide technology is not more effective for student learning than other styles of lecture (Levasseur & Sawyer, 2006). While research indicates which practices support learning and clarifies students’ attitudes toward PowerPoint, effective PowerPoint is not an exact science; few rules can be applied universally. Instructors should consider their audience and their pedagogical goals.

Although students do not necessarily learn more when PowerPoint is used, students prefer slide technology and think they learn better from it (Suskind, 2005). Students also rate instructors who use PowerPoint more highly. One study found about a six percent bump in student ratings of instructors who use PowerPoint over those who don’t (Apperson et al., 2006). Students indicate that what they like most about PowerPoint is that it organizes information, keeps them interested, and helps “visual learners” (Hill et al., 2012). They also, however, critique PowerPoint when slides have too many words, irrelevant clip art, unnecessary movement or animations, and too many colors (Vanderbilt University).

Like all teaching methods, the use of PowerPoint requires that teachers consider and make use of students’ need for variety. If used as one tool among many, lecturing with PowerPoint adds variety to a course, possibly minimizing student distractions (Bunce et al, 2010).

In the interest of variety, PowerPoint lectures should not be excessively long, but the number of slides used in lectures has no direct impact on teaching effectiveness. However, the amount of text per slide is consequential. One study found that slides containing three or fewer bullet points and twenty or fewer words were more effective than slides with higher density (Brock, et al., 2011). Less text on each slide also reduces the amount of simultaneous delivery of material in text and speech, that is, presenters reading out loud the text on the slide, which is an additional barrier to comprehension. Studies show that audiences comprehend less when the same material is simultaneously delivered by text and speech and that for many settings, audio-only delivery of text is more effective.

This process is explained by the cognitive load theory, which states that since working memory is limited and each form of presentation of new material (written text, audio instruction, visual diagram, etc.) requires its own allotment of working memory to process, the amount of working memory available for learning is hindered by unnecessary redundancies in presentation. These effects are more pronounced when multiple presentations of information are processed in the same cognitive domain—such as audio instructions and visual text, both processed in the language domain, known as the “phonological loop” (Kalyuga et al., 2004).

The traditional use of PowerPoint, determined mostly by software programming defaults, involves crafting slides with a topic, question, or theme in the upper banner, followed by text bullet points in the body of the slide. A more effective way to present material is with the Assertion-Evidence Method (see graphic), in which the top banner makes an assertion, written in sentence form (think of crafting the assertion in the style of a newspaper headline). The body of the slide then contains visual evidence of the assertion—if possible, in the form of a simple chart, but pictures and brief text can also serve as evidence. This method has been linked with better understanding and long-term retention (Garner & Alley, 2013). 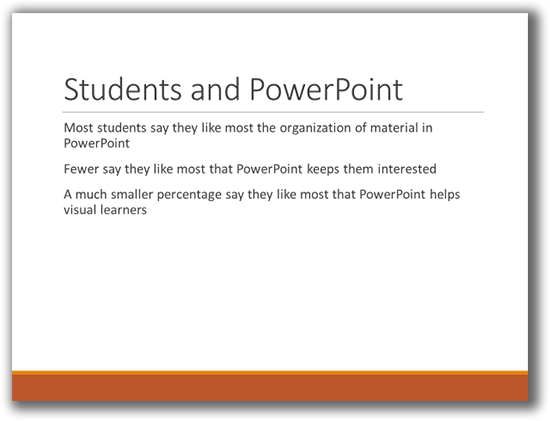 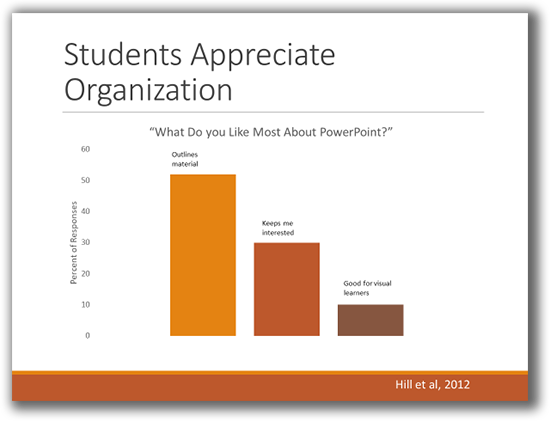 The research above—as well as research about learning in general—encourages certain practices when using PowerPoint: