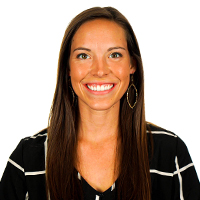 Kellianne Layton is in her fifth season as director of operations after being hired in April 2017. She handles travel logistics, coordinates with athletic facilities staff and manages the team's Data Volley program during the season.

Layton has been a part of four-straight NCAA Tournament appearances and the 2019 Big 12 championship team that earned a spot in the NCAA National Semifinals in Pittsburgh, Pa.

Layton graduated in 2016 with a Bachelor of Arts degree in Recreation from Asbury University. She was a varsity letterwinner in volleyball during her time at Asbury and brings valuable experience as a student-athlete as she transitions to the staff ranks.

Layton's husband, Scott, was a four-year letterwinner in men's tennis at Asbury. The couple have a son, Zane.