If you follow Baylor University athletics at all, you know Lauren Cox. She is a senior on the Baylor women’s basketball team and was one of the standouts last season when the Lady Bears won their third national championship with an 82-81 victory over Notre Dame. That titanic struggle added a large dose of drama for Baylor when Cox left the game with a knee injury with 1:22 left in the third quarter, and the team rallied to win as Cox cheered them on from the sideline.

After the season was over, Cox earned the 2018-19 Big 12 Female Sportsperson of the Year award, sharing it with the Kansas State University women’s rowing team.

Cox also has become a role model and spokesperson for the more than 30 million people in the United States who, like her, live with diabetes. Diagnosed with Type 1 diabetes at age seven, she is able to play basketball with the disease because she wears a glucose monitor on her arm and an insulin pump on her hip when she’s on the court. 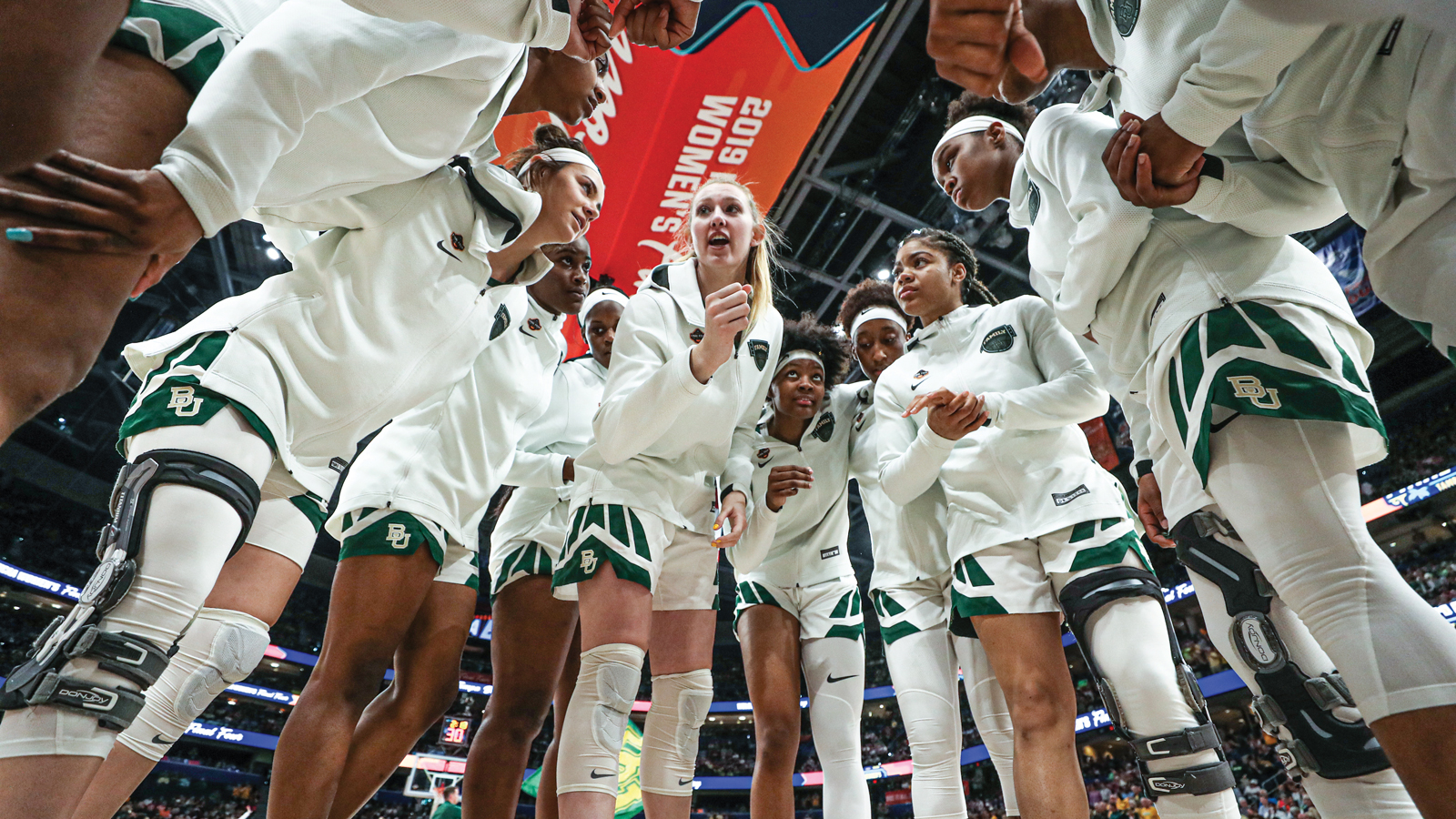 There’s yet another role that Cox plays at Baylor — that of a communication major in the College of Arts & Sciences. But Lauren Cox the student isn’t much different from Lauren Cox the basketball player. Dedicated. Hard-working. Always paying attention to what’s going on around her.

There is one major variance, however. In class, Cox doesn’t say much, and she owns up to that.

“Yeah, I’m more of a quiet person until I get to know you,” she said. “It kind of depends on who I’m with. If I have some friends or teammates in class, I’ll speak up a little more because I just know some people in the class.” Things change, however, when she’s in the gym.

“It’s actually completely different in basketball,” she said. “I’m one of the talkers on the court. I’m always talking at practice. I’m a vocal leader in practice and anything that has to do with basketball. I’m the complete opposite of what I am in the classroom. It’s kind of weird, but it’s just how I am.”

Lady Bears head coach Kim Mulkey recognizes Cox’s leadership, and mentioned it frequently during Baylor’s time at the Final Four this past season.

“She’s the heart and soul of our team,” Mulkey said after the Lady Bears won the national championship on April 7.

And while Cox might not demonstrate that outgoing, vocal leadership in class, it’s her diligent work effort that has earned her numerous academic awards, including being named first team Academic All-District by the College Sports Information Directors of America and first team Academic All-Big 12. At this year’s Final Four, Cox also was given the NCAA Elite 90 Award, which “recognizes the top GPA of a student-athlete at the NCAA Championships for their respective sport,” the athletic department said in a news release in April. So far in her Baylor career, Cox has garnered more than 20 academic and athletic awards — including four gold medals with USA Basketball — with her senior season still to come.

Cox’s professors in the Department of Communication are quick to commend her performance in their classes. “Lauren, both times she took my classes, she sat in the back and she was somewhat reserved, but she would contribute probably three or four times every single class period,” said Dr. Jane Damron, senior lecturer in communication. “My classrooms are pretty interactive. I’ll talk about a concept and then I’ll say, ‘OK, why is this? What do we think about this? What are some real life examples of this? How does this work out?’ And they’re kind of wrestling with the theories and also seeing applications. And I always loved hearing from Lauren because she’d always pipe up from the back and she’d have some very insightful, well-supported, well-grounded comment, giving her thoughts about the scholarly concepts.”

Cox understands why Damron received the 2019 Collins Outstanding Professor Award, an honor voted on each year by the senior class.

“She’s really deserving of that just because she’s just so relatable and she knows how to teach you the information to where you’ll enjoy it and want to actually go to her class,” Cox said.

Lauren Cox being present in his class is one of the things that also impressed John Cunningham, senior lecturer in communication.

“She’s there every day, which is great to me,” Cunningham said. “That’s half the battle for any student, just being there and being present every day and not just sitting there looking at her phone the whole time. She’s a great student. Not just in my class, but across the board. In our department, I don’t know how anyone could find a bad thing to say about her.”

To Kim Mulkey, Lauren Cox as a student of basketball is just as important as Lauren Cox the player. “First of all, you better know what you’re teaching, because Lauren Cox understands the game. She sees the game through the eyes of a coach,” Mulkey said. “I have so much confidence in her that sometimes during the game, I’ll look at her and say, ‘What do you think? You’re out there on the floor. You have a feel for it. Tell me.’ And she’ll say, ‘We need to run this,’ or ‘We need to run that.’ That’s when you know a coach has the upmost confidence in a kid.” 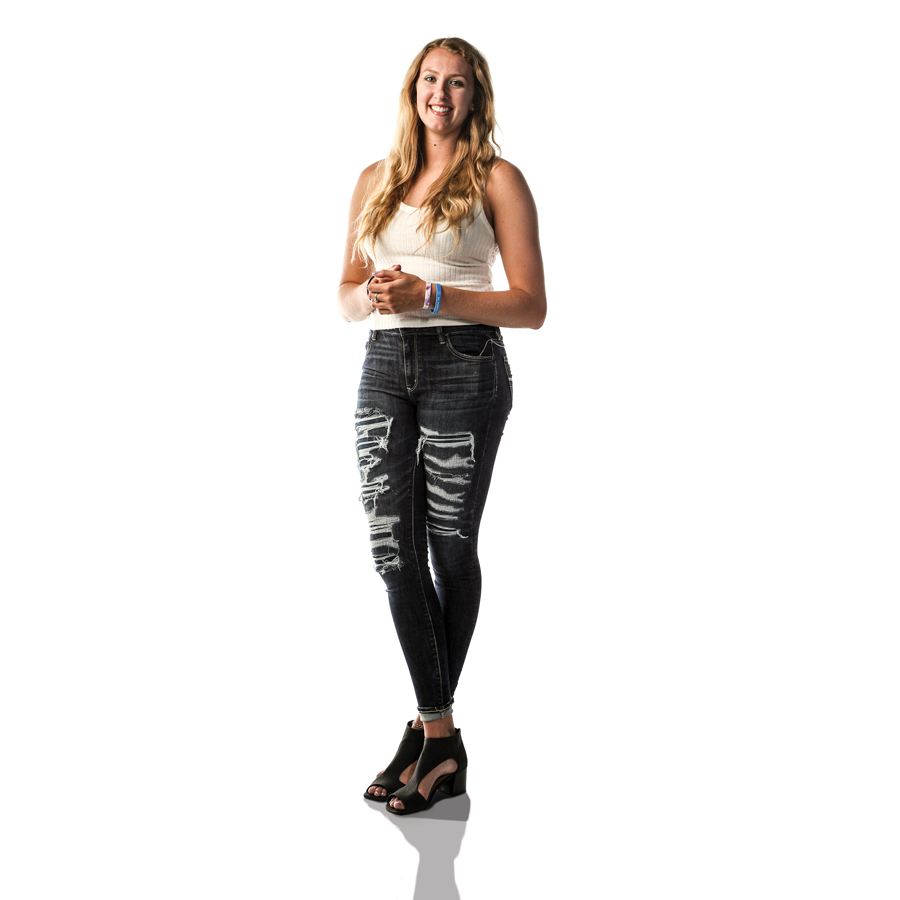 Cox is on schedule to graduate in May 2020, and plans to pursue a professional basketball career. She enters her senior season as one of the top two players in the country, according to ESPN, and will likely battle the University of Oregon’s Sabrina Ionescu for national player of the year honors.

When her pro career comes to an end, Cox said she would likely get into basketball broadcasting or commentating, a job where she can “also have my Type 1 diabetes platform…just to kind of keep doing what I’m doing here at Baylor, showing people that they can do whatever they want. Just try to be an inspiration for them and show them that I’m playing sports at an elite level. And you can do that too. Whether you want to play sports, whether you want to be a writer and actor or anything like that, you can still do it regardless of having diabetes.”

In “Diabetes Didn’t Keep Me From Being Active,” a first-person article that Cox wrote for Champions’ TriBUne at BaylorBears.com, she talked about receiving her diabetes diagnosis on Sept. 15, 2005.

“I went from being a normal 7-year-old kid to now having numerous responsibilities, like checking my blood sugar, counting carbs and taking insulin,” Cox wrote. “This is one of the hardest things that has ever happened to me, but I wasn’t going to let that stop me from being the active kid that I was and still am today.

Cox now wears a continuous glucose monitor on her upper arm and an insulin pump on her hip.

This past July, Cox was one of the leaders in sports, television and film who joined youth delegates from across the United States and five countries invited to meet with members of Congress and their staff to talk about what life with Type 1 diabetes is like and what they can do to support those with diabetes.

Cox also spent her summer undergoing rehabilitation from the knee injury she suffered in the national championship game. She is now one of two seniors on the 2019-2020 Lady Bears team, and said there’s obviously going to be added pressure this season as Baylor begins play as the defending national champions.

“The coaches told us the other day, ‘Why can’t y’all do it again?” We lost two important parts of our team last year (in graduating seniors Chloe Jackson and Kalani Brown), but we have some great returners. We have the freshmen who got some experience last year. And (Coach Mulkey) said, ‘Why can’t you all do it again?’ That’s our plan for this year. We’re going to do everything we can to do that.”