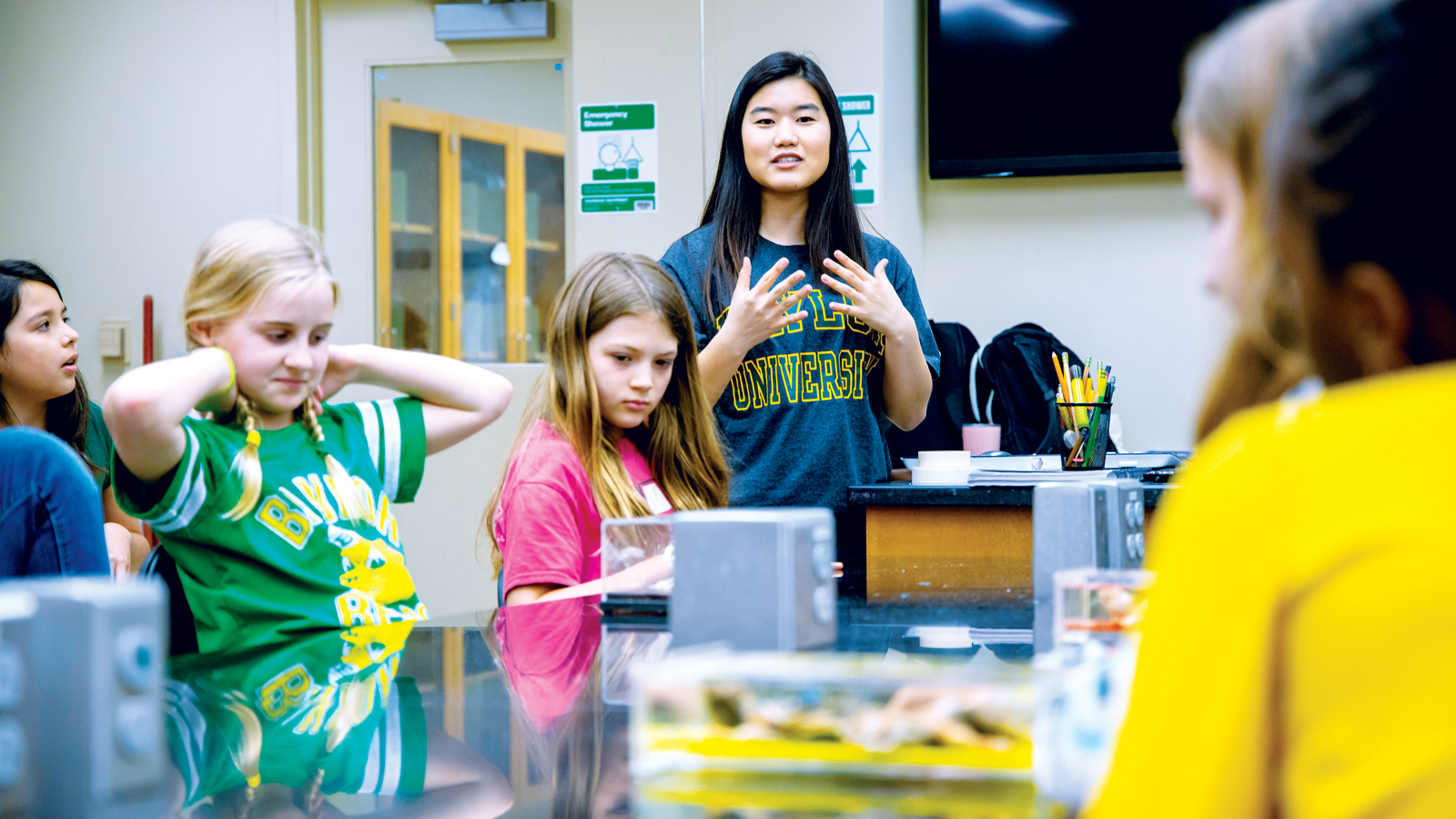 During the spring 2019 semester, the Science Leadership class taught by Dr. Marty Harvill, senior lecturer in biology, took on a new character. For the first time, Harvill had his students expand their knowledge of biology research by teaching it to others — in this case, five classes of students, one each from Grades 3 through 7, in Waco’s Midway Independent School District.

Harvill had been teaching the Science Leadership course with a different curriculum for a while before meeting Courtney Jerkins, coordinator of elementary science and social studies for Midway ISD, at an educational outreach meeting. When Jerkins told him about the need for Midway students to have more hands-on activities involving science research, Harvill got the idea to modify his course and involve his biology students in teaching their younger counterparts.

“All the students in the Science Leadership course had completed a research project in one of my other courses, so they had a good understanding of how this process was going to go,” Harvill said. “However, teaching part of the research process was new to them. I gave them some general guidelines to follow for teaching these younger grades. We had a lot of trial and error in the first two or three weeks, but my students had the freedom to figure out the best way to solve each of their problems.” 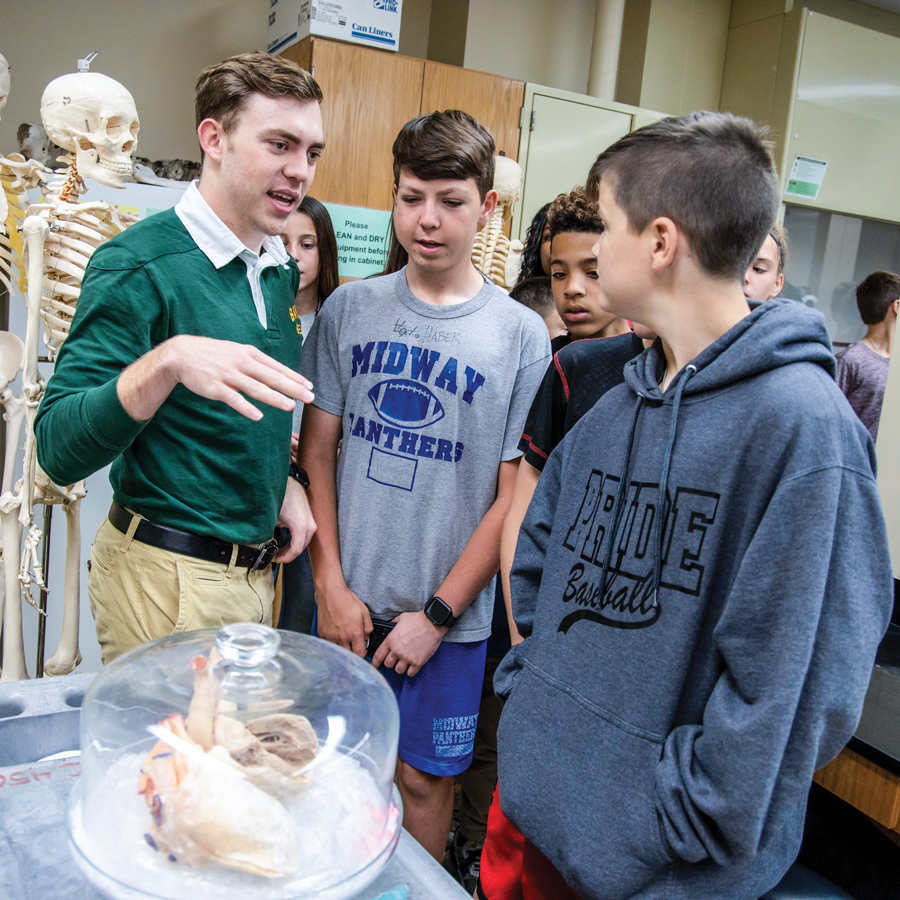 At the start of the 14-week course, each of the five Midway classes was given a list of 10 organisms — ranging from worms and snails to beetles and crawfish — and asked to choose one to study. Then, the 19 Baylor undergraduates enrolled in the course were assigned to different Midway grade-level research groups.

Harvill said the Midway students were also given a list of variables that could be measured, such as temperature, weight and light exposure, and asked to choose which ones they would use to study their organism.

“My students would then ask them, ‘How are we going to test for this particular variable?’ For example, if the Midway students chose to look at weight, what would they use to measure weight? What exactly would be the procedure to measure the organism? And would there be other things that would be important for them to measure?,” Harvill said. 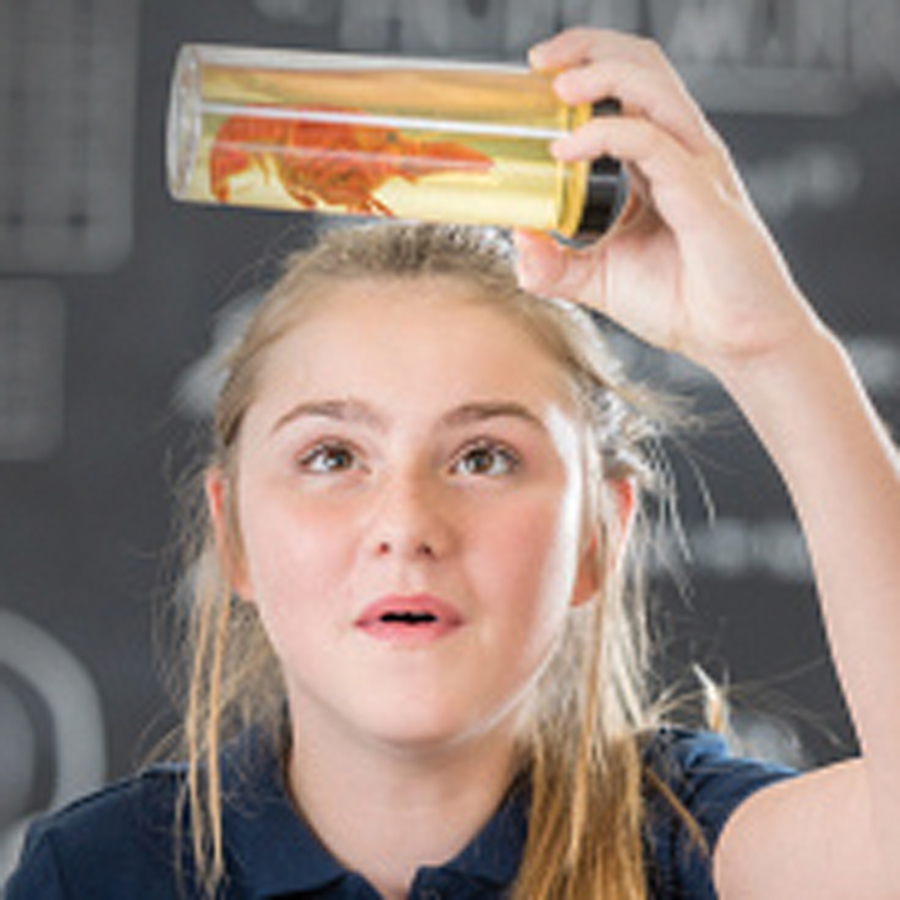 Once the parameters were agreed upon, Baylor spent about $200 per Midway class to send them the things they would need to conduct experiments, including lab materials and the organisms themselves. The Midway students then planned out and performed experiments on the organisms at their schools, as Baylor students observed and offered counsel at a distance via a videoconferencing system known as Zoom.

“The beauty of this project is that we are there to help them through the process, but we try not to tell them all the answers,” Harvill said. “We’re teaching them how to solve problems. We try to lead them by the use of questions to figure out the answers so that they have ownership of their project. It’s their project, not ours, so they are much more motivated to complete it.”

As her part of the course, Baylor junior biology major Megan Vo worked with seventh grade students from Midway Middle School. Their project focused on finding the effects of high temperature, low temperature and room temperature on the weight and length of crawfish. 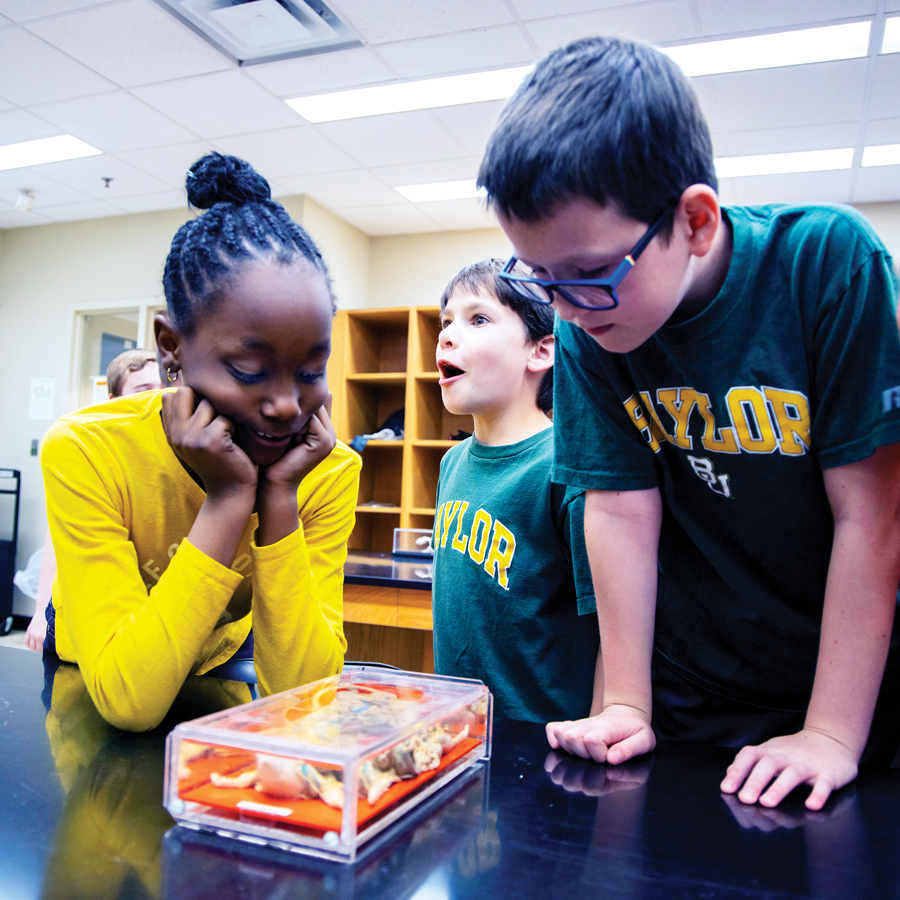 “I’ve learned so much. Being able to see the ability of the students, especially the seventh graders, they’ve been amazing,” Vo said. “They’ve exceeded any expectation that we’ve had of them. We’ve learned from them as much as they’ve learned from us, I think.”

Shawn Horan, teacher of the Midway seventh graders, said she saw the course as a great opportunity for both Midway and Baylor students.

“My students were able to participate in a real research study and collaborate with Baylor students, which they were very excited about. The Baylor students got the chance to teach and lead our students through the activity, and I think this helped them understand how to share their knowledge of scientific research,” Horan said. “I thought the undergraduates did a great job with my students. They had a difficult task of collaborating via videoconference. They learned some things that did and did not work, and they adjusted to try to keep my students’ attention and teach them the best they can.”

Research projects done by other Midway classes included “Effects of Light Exposure on Lady Beetle Survival” by Debbie Strouse’s third grade class at Hewitt Elementary School; the study of bread mold growth in breads sprayed with salt water by Nicole Grygar’s fourth grade class at Woodway Elementary; “The Effect of Different Nutrients on the Mass and Length of Eisenia Fetida (Worms)” by Morgan Castillo’s fifth grade class at Woodgate Intermediate; and “The Effects of Sound Waves on Snail Reproduction” by Elizabeth Fox’s sixth grade class at River Valley Intermediate. Each class performed several trials and went through a thorough scientific method of establishing methods and materials, collecting data and results and coming up with a discussion and conclusions. 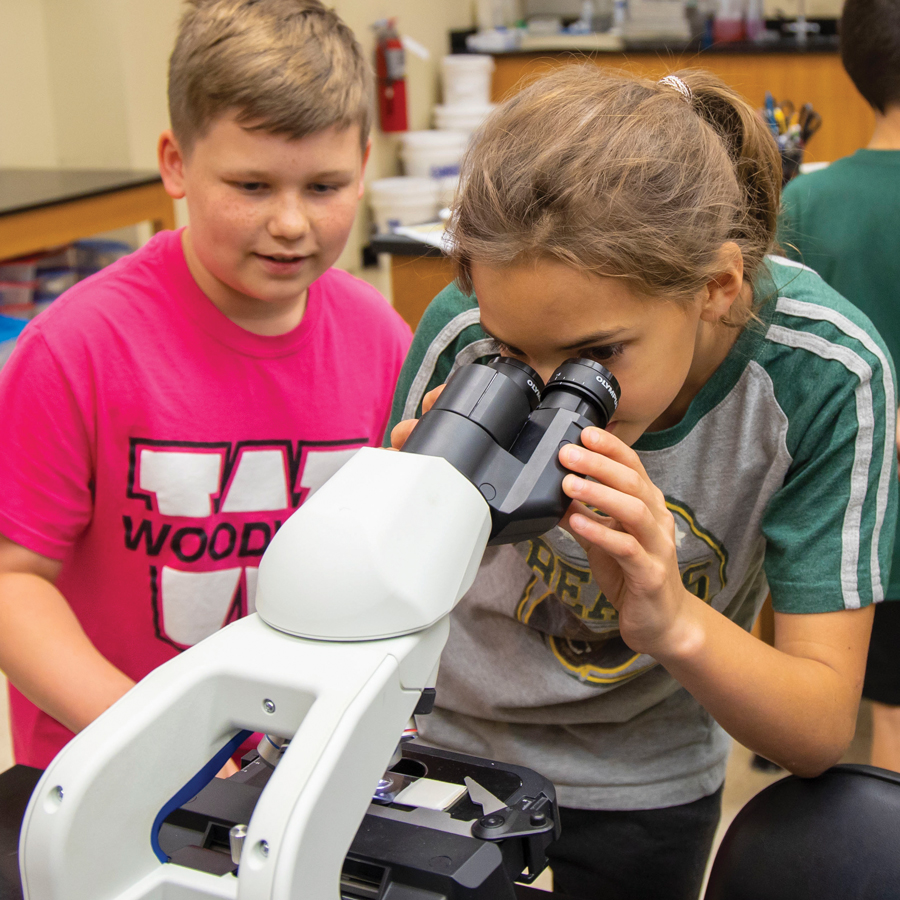 Once the experiments were completed, the Baylor students taught the Midway students the next step — how to compile their findings and present them on a research poster just as scientists and Baylor students do at the conclusion of their own research. On the afternoon of April 26, 2019, the Midway students and their teachers arrived at the Baylor Sciences Building, where they toured various science labs and then got the chance to present their completed research to a large group. The Midway students used the research posters they had made to give five-minute presentations on what they had discovered.

“It was great how excited they were to see their completed posters on the large projector screen,” Harvill said. “The best thing was watching the excitement of my students as they watched their Midway students’ reactions. I told my undergraduates, ‘That is the way I felt when you completed your first research posters.’”

Natalie McGrath, the fourth grade daughter of Dr. Thomas McGrath, senior lecturer and undergraduate program director in chemistry and biochemistry at Baylor, was one of the students who helped present the research done by Nicole Grygar’s fourth grade class at Woodway Elementary. “It was a once in a lifetime experience,” Natalie said. “It gave me the chance to interact with people on a different level in science. The project gave me the opportunity to use my mind in new ways following the scientific method. This experience taught me a lot and I learned to think like a scientist.” 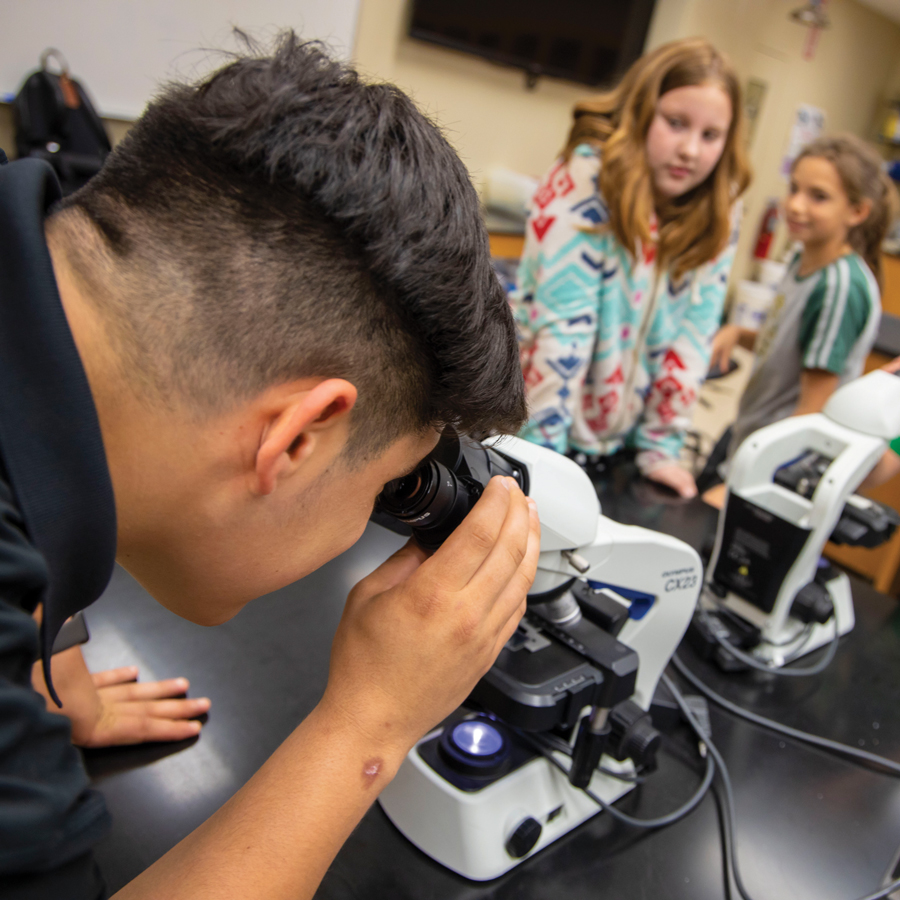 In fall 2019, Harvill has expanded the scope of the Science Leadership course to include not only five classes from Midway ISD schools, but three classes from the Waco Independent School District and one from nearby China Spring ISD.

“After we perfect this course locally, we want to take it to other schools in other states as well,” Harvill said. “In fact, I just got back from a mission trip to Belize, and I’ve talked to a school down there and I’m going to try to run a similar course with them in the spring of 2020. Wherever there is an internet connection that will allow for videoconferencing, we want to try and go there.”