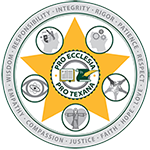 The College of Arts & Sciences’ core curriculum enables students to “acquire the knowledge, skills, and virtues needed to uncover and recognize truth, to deepen their faith, to live virtuously, to strengthen their communities, and to affect the world in transformative ways.” To that end, the core curriculum aims to “inspire moral, intellectual, and spiritual virtues."

Virtues are excellences of character that enable a person to live a life of well-being and happiness. Furthermore, virtues direct one’s actions because they allow one to love and desire what is true, good, and beautiful. There is a long history, from the relatively early medieval period to the present, of the university cultivating the intellectual and moral virtues through the Trivium (grammar, logic, rhetoric) and then the Quadrivium (math, geometry, music, and astronomy) in a way that prepares the student for philosophy and theology, the spiritual virtues of faith, hope, and love being the subject of the latter. Within the Christian tradition, seven virtues—four cardinal and three theological—are understood as those from which all other virtues flow. The cardinal virtues—wisdom, justice, courage, and temperance—are those which can be fostered through diligent practice. The theological virtues—faith, hope, and love—are considered gifts, imparted through God’s grace, and are therefore exclusively spiritual virtues that cannot be generated or perfected solely by human effort.

Though the virtues are not necessarily acquired in any particular order and are inherently interdependent (one cannot be just without also being courageous), the following list of virtues from the unified core curriculum is ordered to mirror what historically has been understood to be the logical and pedagogical progression of virtue formation in the university, culminating in faith, hope, and love.