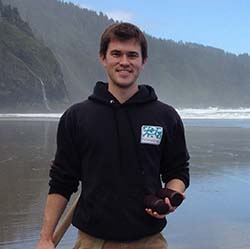 Stephen's dissertation was titled "Spatiotemporal Examination of Benthic Algal and Macroinvertebrate Assemblage Structure Across a Gradient of Phosphorus Enrichment". He applied novel methods to tease out unique patterns of temporal beta diversity in mid-order riverine benthic communities. His first dissertation chapter, "Freshwater eutrophication sharply reduces temporal beta diversity" was published in Ecology in 2018. He successfully defended his PhD in May 2019 and graduated in August 2019. 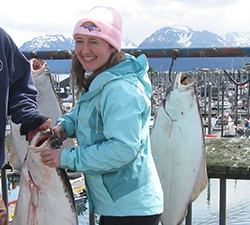 Moncie's dissertation focused on interactive effects of grazing biota and contaminants on stream periphyton. She studied algal and bacterial responses to titanium dioxide nanoparticles (TiO2NPs) with and without fish and snail grazing pressure in stream mesocosms (BEAR facility at the Lake Waco Wetlands). She also studied the mechanisms driving periphyton responses to TiO2NPs under snail grazing pressure observed in the previous TiO2NP field exposure experiment using laboratory streams (aka, "Baby BEAR"). She also coauthored a paper on effects of pulsed atrazine exposures on stream algae. Moncie is currently an Environmental Scientist with CDM Smith, Inc., in Austin, TX. 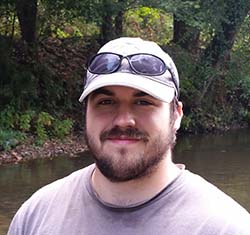 Caleb's dissertation focused on stream metabolism and food web responses to whole-stream dissolved organic carbon (DOC) enrichment in an Alaskan headwater stream. He found dramatic increases in production all the way up to juvenile salmonids, which were both in greater densities and grew faster (marked-recaptured fish) when exposed to low-level DOC. He is currently a Postdoctoral Research Associate at the University of Kansas under the mentorship of Prof. Jim Thorp. He is part of a large NSF Macrosystems project on rivers of the western USA and in Mongolia. 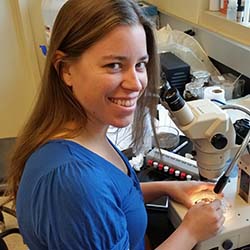 Lauren joined the lab in June 2014, leaving an environmental consulting position as a field biologist and macroinvertebrate taxonomist. Lauren was a core member of the Oklahoma Scenic Rivers study. Her thesis related biomass and production of grazing invertebrates, particularly snails, in response to phosphorus enrichment of streams. She is a Society of Freshwater Science Certified taxonomist. and works for the NC DWQ in Raleigh. 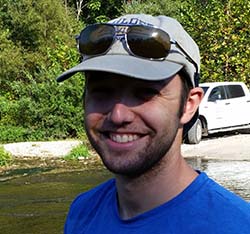 Stephen joined us in Fall 2014 as a research technician on our Oklahoma Scenic Rivers Joint Phosphorus study. Stephen was raised in Arizona and completed several undergraduate research experiences while a student at Notre Dame. Stephen is interested in studying the intersection of science and policy in graduate or professional school, a factor that played into his interest in the Scenic River study. He's now a Ph.D student at ASU in Nancy Grimm's lab. 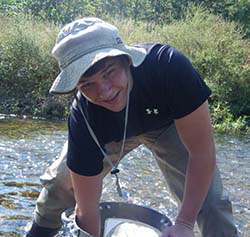 Morgan joined us in Fall 2014 as a research technician on our Oklahoma Scenic Rivers Joint Phosphorus study. Morgan has a strong interdisciplinary background in ecology and environmental science, including an undergraduate research fellowship that took him to study streams in the Andes of South America. Despite his UNC diploma, he is a good guy #GoDuke. Morgan is interested in graduate school following completion of the Scenic Rivers Study. 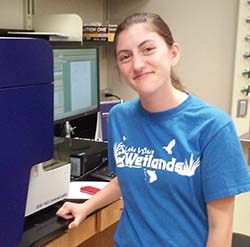 Jemima was a biology and biochemistry at Baylor, and plans to attend graduate school to study microbiology and aquatic ecology. She joined the lab at the end of Fall 2013 and is studied the effects of titanium dioxide nanoparticles on periphyton in stream ecosystems. She currently is working as a research technician in Dr. Dwayne Simmons' lab at Baylor. 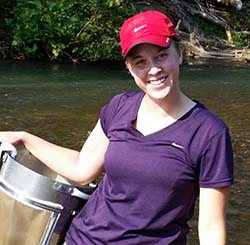 Katherine examined the effects of stream water chemistry on grass litter chemical composition as an undergrad in our lab. She used nuclear magnetic resonance (NMR) to characterize the relative abundance of organic molecules indicative of decomposition and microbial colonization. She then became a full-time research technician on our Oklahoma Scenic Rivers project before starting a PhD program at the University of Oklahoma in Fall 2015. It was difficult moving her profile to the "Lab Alumni" page.... 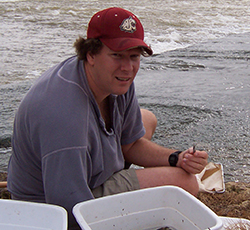 Jeff is a world-class taxonomist and maintains one of the largest personal collections of aquatic Hemiptera and Coleoptera any of us has ever seen. For his dissertation, Jeff compiled an amazing data set on nutrient stoichiometry of macroinvertebrates differing in their life history traits across developmental stages. Jeff is a research associate and lab manager for the Center for Reservoir and Aquatic Systems Research at Baylor. 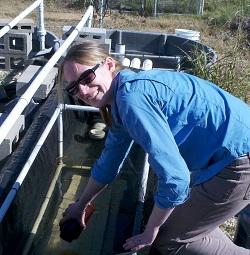 Leanne started at Baylor in June 2012 and brought with her an interdisciplinary skill set that straddles the interface of ecology, chemistry, and toxicology. She directed a series of experiments at the Baylor Experimental Aquatic Research (BEAR) stream facility designed to further our understanding of the fate, transport, and trophic transfer of nanomaterials in the environment. Leanne is currently at the University of Waterloo. 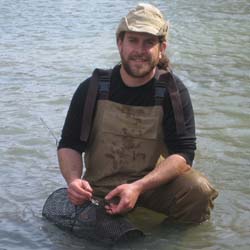 Matt completed a 2-year postdoc in May 2012. Matt led an analysis of stable isotope data from salmon-rearing headwater streams in Alaska and revealed that grass litter was the dominant energy pathway in these food webs, aka, "grass-fed salmon," published in Freshwater Science. He also performed a cyprinid competition and thermal tolerance experiment at the BEAR facility. Matt is now a Program Manager of the Delta Juvenile Fish Monitoring Program with the US Fish & Wildlife Service in Lodi, CA. 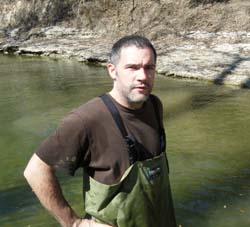 Jesse worked on water snake population genetics prior to coming to Baylor. He applied those skills to fish populations in Texas streams. He coauthored multiple papers in collaboration with the Danley lab prior to withdrawing from the PhD program to accept a position with the US ACOE in Los Angeles as a conservation biologist (and he continues to publish work that he conducted here). 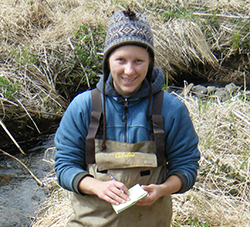 Pam's studied litter decomposition in headwater streams in Alaska, with a focus on the effects of stream nitrate derived from catchment alder. She employed novel nutrient diffusers and demonstrated that litter breakdown (and presumably macroinvertebrate production) was limited by nitrate, and that streams with alder in their catchments were likely to be more productive. She is a NEPA specialist with the US ACOE in Los Angeles, CA. 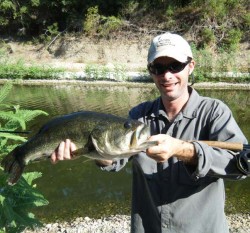 Jason joined the lab in 2006, bringing with him 5 years of experience as a conservation ecologist with The Nature Conservancy. While at Baylor, Jason was awarded an EPA STAR Fellowship, led field crews in sampling 38 central Texas streams over 3 consecutive, grueling-hot summers, helped in the construction of the BEAR stream facility, assisted in 1 and directed a 2nd experimental stream study, and coauthored several papers in addition to leading 3 papers from his dissertation. Jason was a postdoctoral research fellow at Cornell University before moving to the National Sedimentation Lab, USDA-ARS, in Oxford, MS. He was recently promoted to Senior Ecologist. 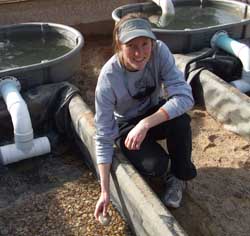 Becky completed an ambitious Master's thesis on the role of alder cover on nitrogen availability, grass litter decomposition and nutrient quality, and macroinvertebrate colonization of litter in headwater streams in the Kenai Peninsula. Two papers were published from her thesis, appearing in Biogeochemistry and J N American Benthological Society in 2011. She is currently a Research Associate with the Alaska Natural Heritage Program at University of Alaska-Anchorage. 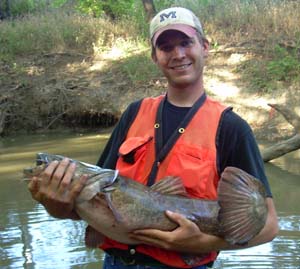 Charles sampled over 100,000 fish in the hot Texas sun for 3 consecutive summers for his thesis research. A paper from his thesis has been accepted with revisions by Transactions of the American Fisheries Society. Charles is currently sampling salmonids in the Klamath National Wildlife Refuge in Northern California. 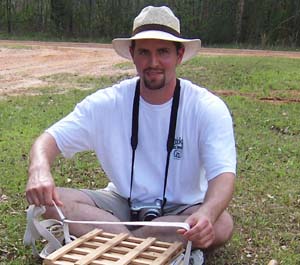 David refined a nutrient-diffusing substrate method and made some fascinating discoveries about the sensitivity of different indicators of nutrient limitation and microbial activity in streams, publishing his thesis results in J-NABS in 2009. He is currently a lecturer in the Department of Biology at the University of Houston. 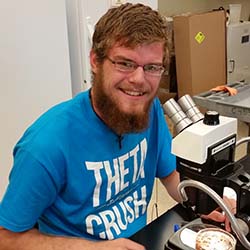 Jacob joined the lab the end of Spring 2014 as a student worker. He is now attending graduate school at the University of North Texas to study toxicology and the effects on aquatic ecology. 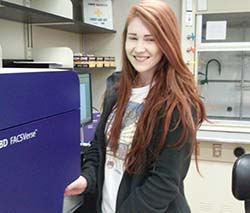 Kaitie started in the lab in the Spring 2014 semester. She helped collect and process samples in two field studies involving TiO2NPs and atrazine. She studied Environmental Science at Baylor with an keen interest in the effects of environmental toxins on freshwater ecosystems in Graduate School. 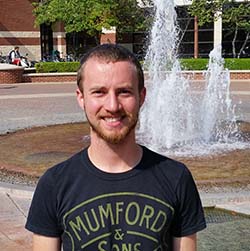 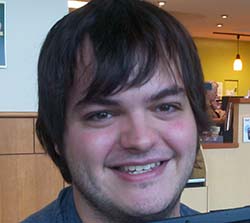 Cagney studied leaf litter breakdown and macroinvertebrate abundance on leaf litter among low nutrient streams lacking wastewater effluent discharges and those that were heavily influenced by wastewater. He coupled a field study across 6 streams with a lab stream microcosm experiment. The litter breakdown results were very similar between the lab and field studies! Cagney is currently a PhD student at the University of North Texas studying Neotropical fish ecology with Dr. David Hoeinghaus. 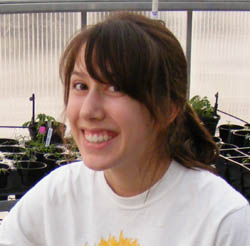 Emily studied the influence of impoundments on population genetics of stream fishes. Populations located upstream of dams and reservoirs are isolated from other populations and, as a result, are likely experiencing genetic divergence. To test this hypothesis, Emily worked with our field crews during summer 2008 to collect fish specimens for DNA sequencing in Dr. Pat Danley's lab, a process which is still ongoing. Emily earned her BS degree in just 3 years (!), graduating in May 2010. 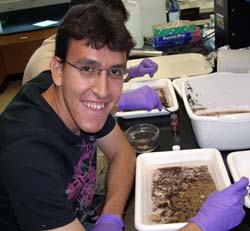 Adolfo studied carbon, nitrogen, and phosphorus stoichiometry of macroinvertebrates in a central Texas stream. Adolfo was also a major contributor to field and lab efforts in support of ongoing extramurally funded research. Adolfo was named the most outstanding Biology student at Baylor in May 2008. He is currently a joint MD/PhD student at UT-Southwestern Medical Center in Dallas, where he received a full scholarship. 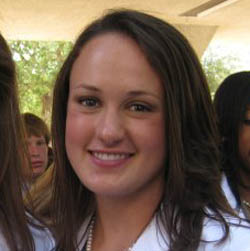 Lindsey initiated the 1st and 2nd annual Tri-Beta Texas native plant sales. Lindsey propogated close to 100 species of Texas native plants from both seed and cuttings, leading to two hugely successful sales. For her 3V90 research project, she coauthored plant information sheets for distribution at the sales. The sheets were so popular they may be used in a regional book on native plants for Texas landscapes! Lindsey was president of Tri-Beta in 2008-09 and was one of the top students in her senior class. She is currently a medical student at UT-San Antonio. 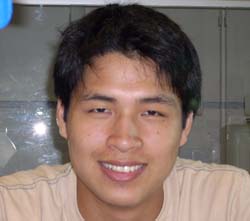 Success helped refine methods for estimating nutrient excretion and recycling in stream fishes, specifically Campostoma and Etheostoma. Success was a core member of our lab and field research teams. Success took a year off after graduation and is now pursuing a degree in medicine. 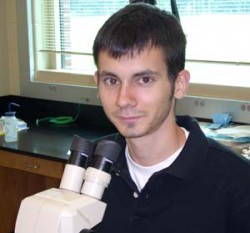 Justin completed his bachelor's in Biology in spring 2007 and played a key role in lab and field research for the group in 2007 and 2008. Justin is an extremely hard working individual and well trained in aquatic ecology. Not surprisingly, he was quickly offered a more lucrative position with the Brazos River Authority as a field biologist, where he is now employed.