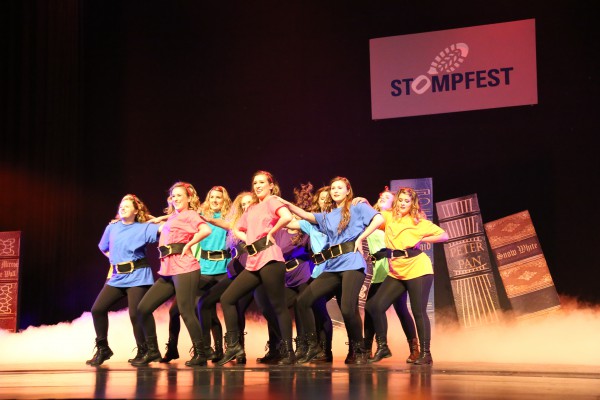 Chelsey Art, the author of this post, serves as a Graduate Apprentice in Baylor Student Productions, working with students on a number of long-enjoyed Baylor traditions such as After Dark, Pigskin, All-University Sing and StompFest.

As the Graduate Apprentice for Student Productions, I get the unique pleasure to serve as the advisor for our annual production of StompFest, a step show that is planned, organized, and executed by Zeta Phi Beta Sorority, Inc. and Student Productions.

StompFest is a step show. For those unfamiliar with the term, stepping is a form of dance in which the body is the instrument used to create beats and rhythms, primarily through a series of footsteps, handclaps, and body slaps. Stepping originated as, and continues to be, a well-known tradition of historically African-American fraternities and sororities, and is often one of the initial experiences new members have as a part of their organizations.

One of my favorite things about StompFest is the atmosphere that surrounds the show and the experience—from participants to audience members. StompFest is one of our more interactive events. The audience is encouraged to cheer, yell, stand up, and show their excitement for the act they are watching. It is not uncommon for the crowd to erupt in cheers when a team does a particularly intricate or fast step routine, especially when teams do movements in which they balance on one leg (the appropriate crowd response to this is “Hold it!”). The show’s energy is something that everyone anticipates and enjoys.

A particularly meaningful feature of StompFest is that all proceeds are given to various philanthropies. Each group is competing on behalf of a philanthropy of their choice, and the top three teams receive a monetary award that then goes to that philanthropy. In addition, Zeta Phi Beta donates all ticket proceeds from the event to benefit Sickle-Cell research. Zeta Phi Beta’s commitment extends beyond the donation by inviting a representative from the Central Texas Sickle Cell Anemia Association to speak during the show every year to increase awareness of the disease.

StompFest is a great opportunity for students from various backgrounds to come together to build friendships as they create and perform engaging and entertaining routines that highlight an amazing tradition within the historically African-American fraternities and sororities.