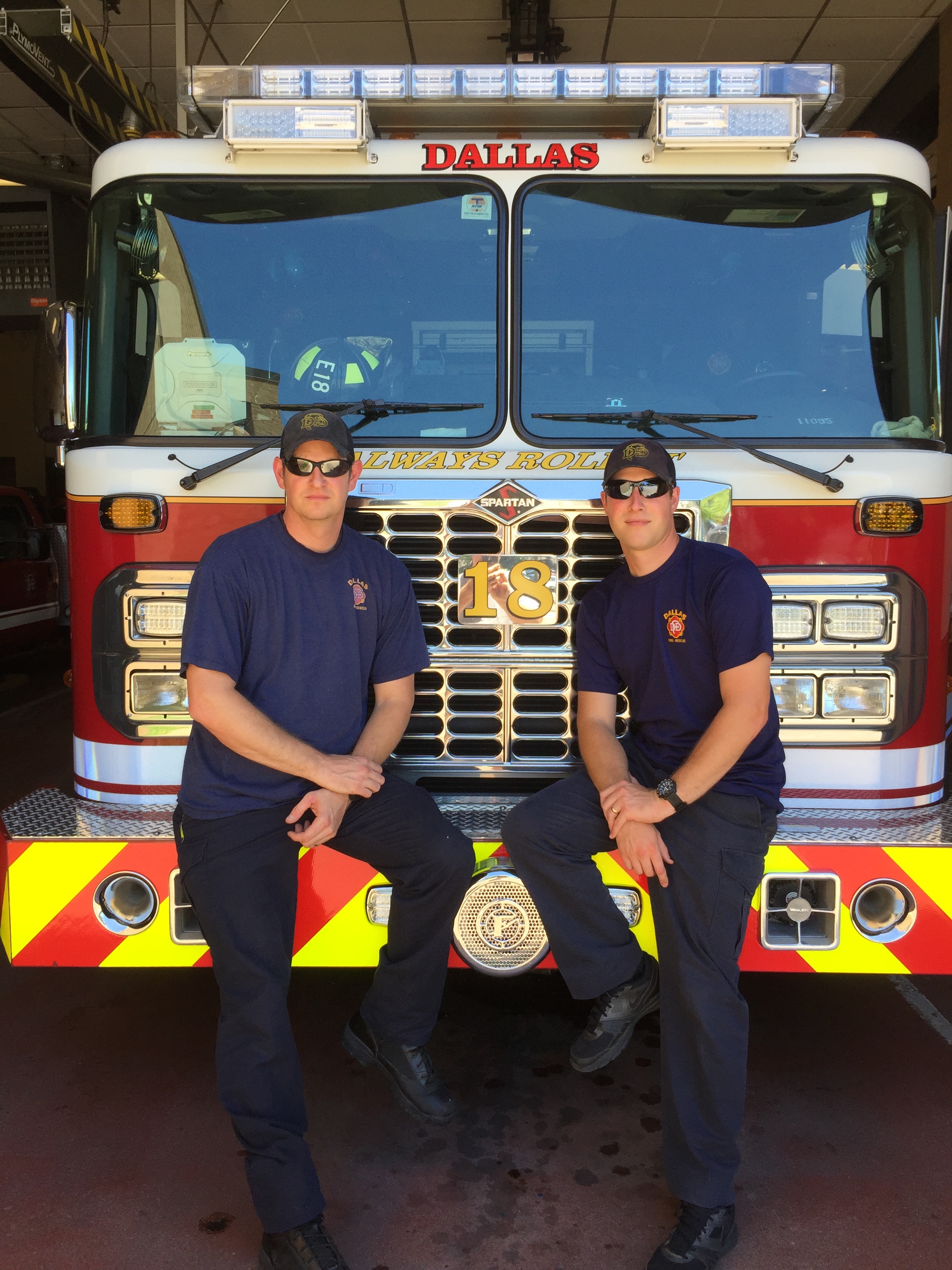 Each week Baylor Alumni is featuring an alum on the front lines of the COVID-19 response.

Q: What drew you both into firefighting?

Kelly Kovar: "Our dad was a volunteer fireman in Combine. We'd go up with him to the meetings, I'd go up there with him and ride on the firetruck and go up to the fire station. It was one of those things that I just fell in love with. Helping people and the adrenaline rush and all the things that come along with being a public servant.

My dad did that for probably 10 years or so. And after that I went to Baylor. And then after I got out of school, it was still what I really wanted to do. I just never changed my career path. I've never veered from that at all. That's always what I wanted to do."

Kyle Kovar: "So Kelly was born in '76 and I was born in '89, so he is my older, older brother (smiles). So with me, let's see, Kelly got on the fire department whenever I was in eighth grade. On the fire department after rookie school, you have a burn night, and your whole family comes and watches, you display all the stuff that you've learned. So whenever I was in eighth grade, I went and watched them put out a fire in a concrete building and then watching them rappel some six stories off a building upside down. So that's really when I got interested."

Q: What are your roles within the Dallas Fire Department?

Kyle Kovar: "Both of us are cross-trained as paramedics, and the Dallas Fire Department runs its own EMS system. We rotate on and off the ambulance. We work 10 shifts a month, with four shifts rotating on the ambulance. So, I'm coming up on eight years in my career, I'm still rotating on the ambulance, so I'm making the medical runs actually with patients. Kelly’s fire engine will be a first responder -- they'll get there and start doing the paperwork, and the ambulance will come behind them. In the city of Dallas, when you call 911 and say, 'I need an ambulance,' you're getting Dallas firefighters on that ambulance. My title is Driver Engineer/Paramedic and then Kelly is Captain."

Q: So, people may not realize how much you are on the front lines of this pandemic. How do you handle the stress and deal with the risks that come with that?

Kyle Kovar: "For me, being truly on the frontline and transporting people -- just last shift, I was in contact with a positive person. We just have to take a time out. You know, we tell the patient to stay right there, and we fully gown-up -- mask, goggles, face shield, gown, I mean the full-blown deal. We're minimizing contact with only one person. So, we have two people that ride in an ambulance together. The other firefighter stays inside the cab, and he has minimal contact. In my six years, I’ve been in the back of the ambulance with people running 106-degree fever with pneumonia, people sick with the flu. It's just another part of the job and it is a risk that I feel that we signed up for as part of helping people."

Kelly Kovar: "So when all the news about COVID started coming out, we started getting updates on our station computers with what it is and what we need to do. I just had a meeting with the guys and told them what was going on. It's my responsibility to take care of them. So, we had a meeting and went through safety procedures for us and for our patients. When it first came out, we just talked about it and what we're going to do. Being in an officer position, you're responsible for the other three guys, not just in COVID situations, but dangerous situations like fires and other emergency calls. Their lives are in your hands and the decisions that you make."

Q: Have you seen an uptick in emergency calls or medical calls since the shelter-in-place order started in Dallas?

Kelly Kovar: "I would say that we have seen a down-tick and that's only because we had a change in our dispatch procedures as far as trying to minimize the amount of people that are being exposed to COVID. So they are now only sending ambulances on these calls, whereas before they would send a fire engine and fire truck."

Kyle Kovar: "I would say a lot of the kind of the routine medical stuff they're handling themselves. Obviously, people are still calling for gunshot wounds. And chest pain and heart attacks and the major, major trauma stuff, but, I would say that the routine lower-end medical calls have slowed down a little bit. Business is pretty much like usual. People are still doing things that they end up needing to call 911 for."

Q: Have you felt support from your community? Are you still connected to your Baylor community?

Kelly Kovar: "We always have people stopping by the fire station, always bringing food, always bringing cookies, always saying thank you and stuff like that. Fire stations are like being in a little family and so it's almost like being in a fraternity or sorority, you know, you're with your brothers or sisters. Kyle was in a fraternity at Baylor -- I was not. But we met some really nice people that we still stay in contact with at Baylor and just in that culture of --"

Kyle Kovar: "That tight-knitted-ness. I’m still close with fraternity brothers, and my wife – we both graduated in winter of 2010. So we're all still connected with a lot of friends and they’ve reached out to check on us. Everybody knew whenever I was at Baylor that this is what I would eventually do. When I would go home on the weekends, I would go to the fire station and ride out with my brother. During the week, it was always funny because all of my fraternity brothers, we would end our meetings and get up and say what we had done on the weekends, and they always knew I would say I’d been out at the fire station with my brother. They would want to know details and hear any new stories.”

Q: It must be great to be part of that legacy.

Kyle Kovar: "Yeah, at the fire department, they always give you a hard time – I’m the younger brother, but I always tell them I’m the better looking brother (laughs). The legacy part of it is really fun to be a part of. And I have a son, Kelly has a son, and I wouldn't hesitate one bit if they got interested in the Dallas Fire Department. It's kind of a cool tradition. But you know, the same with Baylor. I grew up at Baylor – I grew up going to see Kelly down there. I was in kindergarten going to football games and such. There was no choice of where I was going to college. I didn't apply anywhere else. The classes at Baylor, the challenges that we faced at Baylor, I feel like they just helped mold us into who we are. We transitioned that into the fire department and into leadership positions. It's great to share that legacy that we both went to Baylor and we're both on the fire department together."