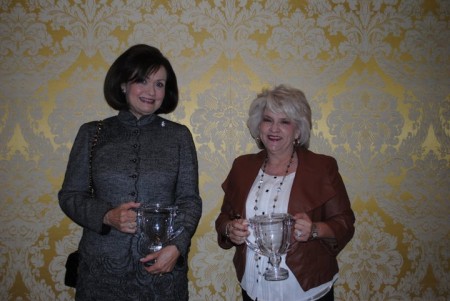 When friends speak of Elaine Nelson, they not only mention her "beauty, grace and fine mind," but also her commitment to excellence and service. Elaine has managed to combine a demanding professional career with service to family, church, community and especially Baylor.

A graduate of both Leadership Dallas and Leadership Texas, Elaine has used her skills on the boards of the Children's Medical Center, North Texas Women's Business Council and Interfaith Housing Coalition. Her involvement in organizations has been extensive, ranging from Kappa Kappa Gamma Alumnae to Dallas Women's Club, Dallas Garden Club and Junior League, among many others.

Elaine has served BUWC in numerous capacities since the group's founding, including as president. Her service as Fundraising Chair was pivotal to the organization's mission. Under her leadership, the Barnabas Circle of the Dale and Anita Jones Endowed Scholarship was established, raising hundreds of thousands of dollars to provide scholarships for Dallas area students.

A member of Park Cities Baptist Church, Elaine has taught in both the children and youth divisions and currently devotes much time to the Nearly Wed Seminar for engaged couples at the church.

Elaine has been married for more than 40 years to her Baylor sweetheart, David, whom she describes as "my best friend and the kindest man I know." The Nelsons are parents of two daughters, Carol, who passed away in 1996, and Harlan Nelson Hrncir. David and Elaine have supported Baylor in countless ways, including through an endowed scholarship in the Baylor Law School and the Carol Nelson Memorial Prayer Room in Baylor's Panhellenic Building.

An outstanding example of the scripture, "Whatever your hand finds to do, do it with all your might," it is our honor to present this true Woman of Distinction for 2010.

"A servant's heart" is a phrase used often by friends and family to describe Terri Wimberly Heard. Terri, herself, likes to say that "if you are looking for a job in service, God has a plan and a place for you."

Terri's service to Baylor began as a student as she received both a bachelor of business and a master of educational psychology degree. At Baylor, she also met her husband, Drew. "A constant friend and supporter of Baylor, I was caught up in the draft," she says. The parents of two daughters, Hillary Heard Atkinson and Haley Heard, Terri and Drew served as co-presidents of the local Baylor Parents League chapter, and were honored as members of the "First Families of Baylor" in 2001.

Their service has extended not only to Baylor, but also to Terri's church and community. An active member of Park Cities Baptist Church, she has served as a weekly greeter, committee member and teacher of both adults and children in many activities. She has held numerous offices in the Lake Highland's Women's League, including president and fundraising chair, helping to raise thousands of dollars in scholarships each year for students from the Lake Highlands area.

A charter member of BUWC, Terri has served on countless committees, was a founding member of the Barnabas Circle and was president of BUWC for the organization's 20th anniversary celebration in 2007. She has opened her home for meetings, cooked for Cheer! and nursing school graduation brunches, sent countless words of encouragement and even carried the BUWC banner in Baylor's Homecoming parade!

Since her husband's death five years ago, Terri has found strength in total commitment to God's will for her service. She has made numerous trips to India and Bangladesh, working in areas of great poverty and spreading the news of Jesus' love. Closer to home, she teaches ESL each week through her church's ministry in the Vickery area of Dallas. She also has fostered an Indian family whose husband/father is now a student at Baylor's George W. Truett Theological Seminary.

It is our honor to present this outstanding Baylor woman and true servant as a 2010 Woman of Distinction.