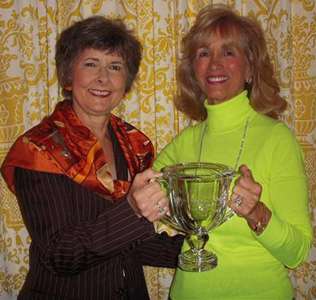 Julie's love of Baylor began while she was a student there, earning both a Bachelor of Arts degree and a Master of Science degree. Teaching school for the following sixteen years allowed her to utilize that excellent Baylor education. Julie has been an active member of the Baylor University Women's Council since its beginning and has hosted numerous council events in her home.

Julie and her husband Jim have been exemplary in living out their personal creed which is "to give back to the community that supports their business." And that they have done. Julie's service has included giving of her time and financial resources to the Crystal Charity Ball, the Dallas Baptist University Board where she served as chairman and the Baylor Health Care System Foundation Board. Julie currently serves on the advisory board for the Salvation Army, the Children's Cancer Fund, and the Cattle Baron's Ball.

Julie was actively involved in many of the business affairs of the Dr Pepper/Seven Up bottling group, even selecting the "Deja Blue" for their bottled water. She and her husband bought the company in 1985 and built it into a very successful business. The company sold in 2005.

One of Julie's greatest joys is giving back to her beloved Baylor for all it has meant to her and Jim. Together they have provided endowed athletic scholarships and numerous athletic facilities, making Baylor their number one philanthropic beneficiary.

Julie and Jim have two wonderful daughters, Amy and Jenna, and two adorable grandsons, Turner and Jackson. Though serving her community is vitally important to Julie, being grandmother "Jules" to her grandsons is her favorite way to spend her time these days. Julie serves as a role model for all of us, and it is our honor to present this outstanding, committed Baylor woman as the 2009 Woman of Distinction.