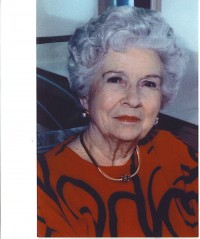 Mary Russell McCall has had two lives. First, she taught school and later worked as a guidance counselor in the Waco Independent School District while married to Baylor University Department Chairman Dr. Lloyd O. Russell. Her second life began when several years after the sudden death of Dr. Russell, she married Abner V. McCall, then President of Baylor University.

While she was First Lady of Baylor, she designed and supervised the building of the President's Home in the campus faculty area. For months she had studied architecture and traveled to Williamsburg to make sure the home was authentic in its design.

She developed many friendships with Baylor alumnae, professors and students, and she was a consumate fundraiser for Baylor. In 1995 Governor George W. Bush named her a "Yellow Rose of Texas."

She served as a Trustee for the First Baptist Church of Waco and longtime Sunday School teacher for college freshman girls. For twenty years she chaired the Baylor Roundtable Scholarship Committee that was established during her tenure as president. She is currently president of her Sunday School Class at Park Cities Baptist Church in Dallas, where she also belongs to the Variety Book Club. She is a member of the DAR, the Washington Descendents Society, the Huguenot Society, and the Ermance Book Review Club.

In 1936, she enrolled in Baylor as a 16-year-old student who eventually transferred to North Texas State Teacher's College to study and work when World War II intervened. She received the Master of Science degree from Baylor in 1965. She has two Russell daughters, Nancy Chapman and Linda Letbetter, and four McCall stepchildren, Anne Chroman, Bette Miller, Kathleen Sigtenhorst and Dick McCall. Their family was the first recipient of the "First Families of Baylor" award. Mrs. McCall currently lives at the Edgemere Retirement Center in Dallas.