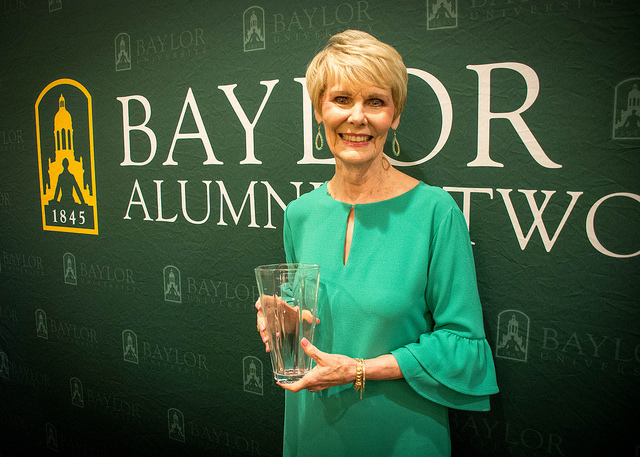 Mary Ann comes from a long line of Baylorites: 26 members of her family claim Baylor University as their college. Mary Ann (NA '63) met her future husband, Doug, the very first week of her freshman year. They have been married for 56 years and have two grown daughters who also met their husbands at Baylor. Shari Hill Vickery and Amy Hill Chapman also met their husbands, Ronnie Vickery and Matt Chapman, at Baylor. Allie Small and Jake Champan, two of the Hill's five grandchildren, are presently Baylor students.

Mary Ann is a consistently strong supporter of organizations relating to Baylor University. She served as President of the Baylor University Women's Council of Dallas in 2013-2014 and spearheaded the Barbabas Circle Endowed Scholarship Campaign the year BUWC's scholarship reached the prestigious Golden Bear Benefactor level. She has also chaired both Spring and Fall Luncheon Events for the organization. The Hills moved from Dallas to Waco in 2016, and Mary Ann is now on the Board for the Baylor University Women's Council of Waco. From its origination in 2011, she has been a member of the Louise Herrington School of Nursing Going for the Gold Gala Task Force. The first 4 years, she served as the chair of the Gala VIP Reception Committee. From 2016-2018, she was the Gala Task force Chair, and she will serve in that position again for this Spring's gala. Mary Ann is also a member of the LHSON's Dean's Board. The Hills are enthusiastic Baylor sports fans. They have season tickets to Baylor football, men and women's basketball, and baseball. They rarely miss a game.

For more than 40 years Doug was the owner and president of Sports Travel Inc., a wholesale travel company whose mission was to assist churches with affordable travel needs. For 20 of those years, Mary Ann was the Sales Administrator for the family business. Together Mary Ann and Doug served hundreds of congregations in facilitating travel including ski trips, mission trips, choir trips, weekend retreats, and both beach and mountain summer camps. They both loved the work and considered it a personal ministry. The HIlls are semi-retired but still work part time with special clients.

Shortly after moving to Dallas in 1968, Mary Ann and Doug joined Wilshire Baptist Church where they were active members for forty-eight years. During their many decades there, Mary Ann and Doug served tirelessly in many leadership and planning positions within the church. Mary Ann served as a Sunday School teacher or a Sunday School Department Director most of those years. She was deeply involved with the music ministry and frequently served as the director of the church's musical drama productions. She was Sanctuary Choir president for three years. In 2001 she was the chair of the church's Fiftieth Anniversary Celebration held at the Meyerson Symphony Center. As a part of her service on the Personnel Committee, she was chairperson for the church's Minister of Music Search Committee in 2003. She is an ordained deacon and served as Vice Chair of Deacons. For ten years, she was a member of the congregation's Long-Range Planning Council, serving as the coordinator for two of the major initiatives, Serving and Learning. She was also a part of the nineteen member Diversity Study Group appointed by the deacons in 2015. The Hills are presently members of First Baptist Church Waco.

Mary Ann is a lover of life, faith, family, friends and Baylor University!