Bears in the Wild

Encountering alumni in their natural habitats

Bears in the Wild

What do you do if you encounter a bear in the wild? The National Park Service recommends remaining still, identifying yourself (no, really!) and waving your arms slowly.

What do you do when you spot a Baylor Bear in the wild? Funny enough, all the same things!

The National Park Service says there are three types of bears in North America: black bears, brown bears (including grizzlies) and polar bears. They are recognizable by their shaggy coats, round ears and long, curved claws.

With all due respect to the NPS and their dedication to caring for America’s special places and animal inhabitants, there’s actually a fourth — they can just be a little harder to spot.

That’s why Baylor University is launching “Bears in the Wild” to help Baylor alums at home and around the world find each other, create friendships and deepen their connection to the University.

“This is going to really change the landscape of how our Baylor Family can rally around one another with tremendous spirit and enthusiasm and have fun together,” Baylor Vice President for Advancement David P. Rosselli says.

Encountering a Baylor Bear in the wild is the first step.

Luckily, Emmy Award-winning TV host Chet Garner, J.D. ’06, has some tips on how to spot them:

Garner, known for his popular Texas-sized PBS travel show “The Daytripper,” has traded his signature cowboy hat for a safari hat to help the more than 150,000 Baylor Bears in the wild find each other and connect to their alma mater. “There are so many Baylor alums out in the wild and there is a mutual camaraderie that we all share, but we’re often hard to spot,” he says. “We need to recognize each other so that we can get a little louder out there in public because we’ve got all the reasons to shout from the mountaintops.”

In the past year alone, the Baylor football team under Coach Dave Aranda took down Oklahoma State in the Big 12 Championship and Ole Miss in the Sugar Bowl to end the season ranked in the nation’s top 5; Baylor was named a Research 1 (R1) university by the Carnegie Classification of Institutions of Higher Education; and a record number of students applied to one of the country’s preeminent Christian higher education institutions.

Garner says encountering a Baylor Bear in the wild can open doors to not just finding somebody to loudly cheer with (although he resoundingly endorses that idea, too!) but connecting with a brother or sister in Christ on a deeper level.

“Life is meant to be done in community, and if you can rally your community around shared experience, shared beliefs, shared values, then those communities are just going to be richer,” he says.

Chet’s top places to encounter Baylor Bears in the wild:

“Just give it a shot,” he says. “I guarantee you’ll make a new friend. And who knows where that’ll lead!”

It’s no secret that Baylor Bears have been looking out for one another for generations. The pages of this magazine are filled with stories of everything from internship opportunities that led to high-ranking job placements to engagements, marriages and even new families — all because one Bear spotted another in the wild and made that connection. “I hear from young alums that share regularly about how this institution has shaped their lives,” Rosselli says. “I work with alums on a daily basis who are giving back philanthropically because they believe that the resources that they have in their lives today, and the path that they’re on today, have only been made possible because of their journey and their experiences when they were students at Baylor.”

Rosselli says alumni engagement at many universities is often reduced to calls for donations. But engagement, he says, is about being truly connected to the institution through what he calls the “volunteering of time, talent and then treasure.”

Attending a watch party; showing your green-and-gold pride on social media; receiving a badge of honor for your connectedness to the Bears in the Wild community — all are things Rosselli points to as ways to spend your time that will generate spirit and show value to the University. As for talent, Rosselli says it might mean providing opportunities to other graduates in the communities in which you live or extending an internship to a young student who hasn’t graduated yet.

“If you just think back to when you were in school and how valuable those opportunities were, when someone tapped you on the back and gave you that opportunity, that’s paying back and paying forward,” Rosselli says.

When Baylor alumni have taken a job somewhere or moved to some place “far from Waco, Texas,” Garner says, the Bears in the Wild program should help facilitate plugging them into a community there — “whether that’s for the deeper stuff or just getting together to watch the Baylor football team win a national championship — which could happen!”

“Imagine the power of the Bears if 150,000 of us come together and demonstrate that Sic ’em,” Rosselli says. “Every single Baylor alum is important to the health of the institution in giving time, talent or treasure in any way that you can.” Though they come in all shapes, sizes and colors, Baylor Bears at home and in the wild are united in their love for the University and the passion they share for its success. Rosselli says the Baylor Family is intimately interested in the work that’s being done on Baylor’s campus to develop young people into Christian leaders around the world.

“I know of no other university that is coming around its administration, students, parents, alumni and friends the way our alumni are doing in prayer,” he says. Garner adds that the program is more than just flinging your green and gold afar (or wearing them on your shirt): “The school colors are great. They’re a symbol that these people had a shared experience with you. But more than likely they’re also an indicator that they share a personal faith with you.”

The Bears in the Wild program, he says, is about asking alumni to go out and shine their own lights, “to be a beacon for others — whether that’s in their families, their workplaces, in their communities, and, I would hope, to the Baylor community at large.”

When asked if he has any stories or experiences of encountering a Baylor Bear in the wild, he says that as a part of his wide-ranging Lone Star travel show there have been times when he has been recognized at a diner in “some random Texas town” and gotten the Bear claw and a “Sic ’em!” from across the room.

“But it takes somebody raising that claw,” he jokes. 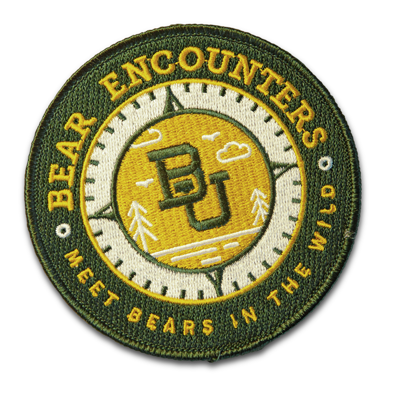 Once one of these impressive creatures is spotted in the wild, they should: