For all the four- and five-star talent that was on the field at AT&T Stadium in Arlington, Texas, the Big 12 Championship game was decided by a 5-foot, 9-inch, 185-pound safety — a two-star prospect and former walk-on whose recruiting came down to “a couple emails.”

Jairon McVea, B.S. ’20, was already having the game of his life: eight tackles, his third career interception and a pass breakup that created another pick. His ninth tackle was a play that will be remembered as one of the greatest in Baylor Football history. With Baylor’s run blitz on fourth-and-goal from the 1-yard line clogging up the middle, Oklahoma State University running back Dezmon Jackson popped outside and seemed to have a clear path to complete the comeback from a two-score halftime deficit. But, McVea sprinted and stopped Jackson inches shy of the pylon, preserving the Bears’ dramatic 21-16 victory. 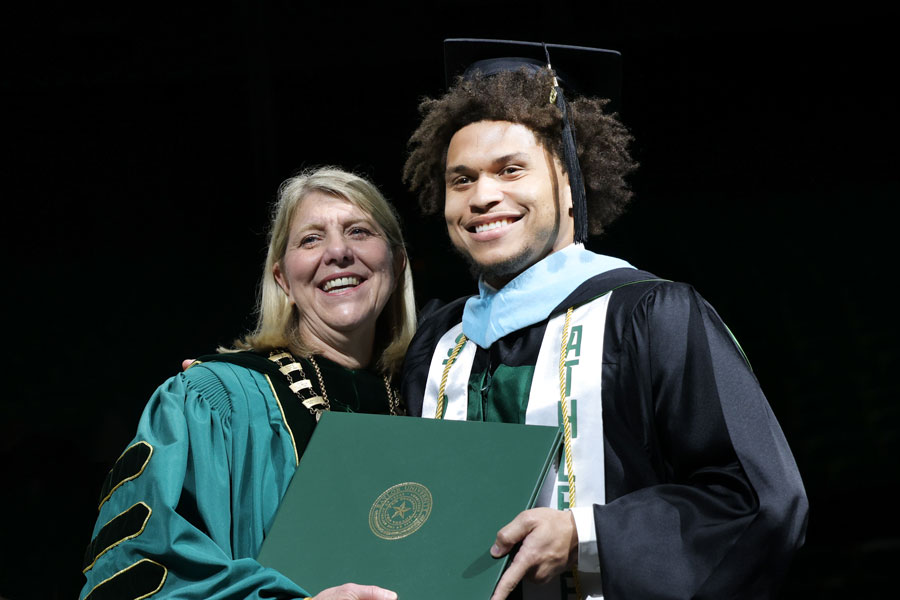 “Everyone dreams of that,” McVea said after the game. “Game on the line; it’s up to you to make the play. I just said, ‘I’ve got to run this guy down.’ Tried my best to do that, and it worked out. It was good.”

No, it was way better than good. Not only did the Bears claim their third Big 12 title in the last nine years and first since 2014, they tied a program record for the most wins in a season and earned a spot in the Sugar Bowl for the second time in three years.

“This moment here is something they can never take away,” fifth-year senior linebacker Terrel Bernard said. “We worked so hard to get here, and I’m glad it’s finally being seen.”

Bernard, a first-team All-Big 12 selection, and fellow linebacker Dillon Doyle shared the team lead with 10 tackles in the Big 12 Championship against Oklahoma State.

Meanwhile, Baylor’s secondary was aggressive and opportunistic. The Bears intercepted Oklahoma State quarterback Spencer Sanders four times in the game and seven times in the teams’ two meetings this season. Sanders was intercepted only five times in 272 passes during the Cowboys’ other 11 games.

All-America safety and Big 12 Defensive Player of the Year Jalen Pitre, B.B.A. ’20, M.S.Ed. ’21, anchored the secondary all season and in the Big 12 Championship. He and fellow senior safety JT Woods each had seven tackles. Pitre had two stops behind the line and broke up two passes, while Woods had a pivotal first-quarter interception that set up Baylor’s first score of the game.

However, it was McVea who shined brightest at AT&T Stadium. Ironically, if not for NCAA legislation that allowed student-athletes an extra year of eligibility due to the COVID-19 pandemic, McVea would not have played this season, let alone in the Big 12 title game. The rare sixth-year senior redshirted in 2016, and the Sugar Bowl was his 59th career Baylor game — second in program history behind teammate running back Trestan Ebner.

“It’s a fairy-tale ending, and you couldn’t have written it any better than this,” McVea said.

McVea was the defensive most valuable player for George Ranch High School in Richmond, Texas, when the Longhorns went 16-0 and won the state championship in 2015. Nonetheless, McVea received little to no recruiting interest as a relatively undersized defensive back.

“Yeah, it wasn’t an extensive recruiting process at all,” he said. “A couple emails, and then I kind of showed up on report day and got to work. No official visit, none of that stuff, but it’s been amazing here at Baylor.”

Primarily used on special teams his first two seasons, McVea was granted a scholarship by then-head coach Matt Rhule in the spring of 2019. He played every game this year but did not make his first start until the penultimate game of the regular season at Kansas State, replacing the injured Christian Morgan.

McVea had three tackles at Kansas State and seven tackles against Texas Tech in the regular-season finale. His third start of the season — and sixth of his career — was his best.

When McVea forced Jackson’s dive for the end zone to fall short with 24 seconds left in the game, it all but sealed the deal for the Bears. Every Baylor fan in attendance and everyone on the Baylor sideline went crazy. Everyone, that is, except second-year head coach Dave Aranda, who remained calm with his arms crossed and his trademark stoic look. Maybe it’s because he was confident that McVea would make the play.

Earlier in the year, when the coaches were struggling to get players to go full speed in practice, Aranda noticed McVea was a player who always did it the right way.

McVea’s stop was the last of several goal-line stands by a Baylor defense that also had two sacks, eight tackles for loss, five quarterback hurries and four pass breakups. On three other trips inside the 10-yard line, including a first-and-goal from the 1, Oklahoma State never found the end zone and settled for three field goals.

“We preach stopping teams on the goal line and making them kick field goals,” McVea said. “Anytime we can hold someone to a field goal down in the red zone, we take that as a win on defense. It’s a huge game-plan thing, and we went out and executed it.”

Like Aranda, redshirt freshman quarterback Blake Shapen said he had “major confidence” that the Baylor defense was going to make the play.

“I didn’t even watch it, actually,” Shapen said. “My head was down praying.”

Shapen made his second career start due to the unavailability of fourth-year junior Gerry Bohanon, who was sidelined with a hamstring injury. Shapen showed no sign of nerves as he established a Big 12 Championship and stadium record by completing his first 17 passes of the game. Along the way, he connected with tight end Ben Sims, wide receiver Drew Estrada and wide receiver Tyquan Thornton for touchdowns.

“Doesn’t surprise me,” Aranda said of Shapen, who attempted three passes in the season’s first 10 games before Bohanon’s injury in the second quarter of a 20-10 win at Kansas State. “I think he’s got that moxie about him, like a gunslinger.”

Shapen was named Big 12 Championship Most Outstanding Player, going 23-of-28 for 180 yards and three touchdowns passing. He also had the game’s longest play from scrimmage with a 28-yard run in the third quarter.

“This is something you dream about as a little kid growing up,” Shapen said. “We wouldn’t be in this position without Gerry and the things that he’s done for this team moving forward. My job was just to replace him and try not to lose a beat.”

Shapen, who was also a top-rated baseball prospect out of Evangel Christian Academy in Shreveport, Louisiana, chose Baylor over the University of Southern California. He said the culture Aranda has brought to the program makes him a perfect fit for Baylor.

While this was the Bears’ first Big 12 title in seven years and the first Big 12 Championship Game win, Shapen expects more future success.

“We can build on this and be contenders every single year after this if we put our heads down and keep working hard,” he said.