She Came to Play

She Came to Play 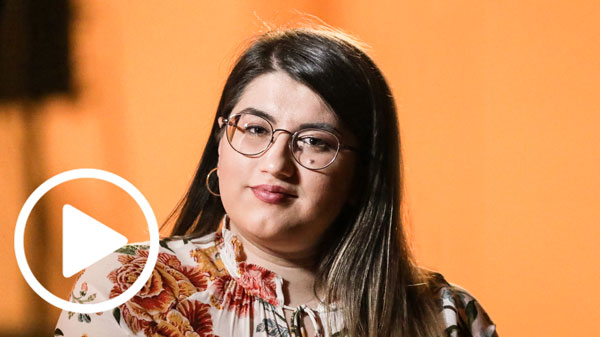 Four years after coming to the United States from her native country of Albania, Floralba Zguro has made Baylor home. During fall 2019, she was one of 949 international students at Baylor (or 5.3 percent of the total student population — and that does not include another 227 students with permanent resident status). These young people representing 95 countries enhance campus life with rich cultural diversity, sharing their knowledge and experience with others inside and outside of the classroom.

Zguro, who goes by Alba, is from Korçë, a cultural hub in Albania, which borders Greece, Montenegro, North Macedonia and Kosovo in southeastern Europe.

Her dream of studying piano away from home became reality in 2016. A teacher in her home country knew of an Albanian piano professor at Tyler [Texas] Junior College. Zguro spent two years there before coming to Baylor through her Tyler professor’s connection with Dr. Jani Parsons, a Baylor lecturer in piano.

In January, Zguro won the Baylor Concerto Competition, which is open to all students in Baylor’s School of Music. She chose to play Maurice Ravel’s “Piano Concerto in G Major” — three movements heavily influenced by jazz.

“It’s almost 30 minutes of playing music from memory, from your mind and your heart and soul,” Zguro said. “I really did not expect anything because all of the students at Baylor are well-prepared and very talented.”

From an early age, she had interest in music, starting with a singing competition at age 4.

“Playing piano made me really happy, and I especially love to perform for other people,” she said. “The satisfaction that playing a piece of music gives you, I cannot compare it to anything else, playing the piano, for me, it’s like just opening up my heart.”

Because of the scholarships she has earned through her academic excellence and through her on-campus jobs, Zguro is financially independent. She works and volunteers with the Center for Global Engagement (CGE) and Baylor Libraries.

“My [CGE] group ambassador helped me immensely, and I met so many people from other countries,” Zguro said. “I decided to apply to be an ambassador myself. I’m so fascinated by culture, and I want to help as many students as possible make their time at Baylor better.

“You really don’t know until you get out of your own country and out of your comfort zone, how much you can do,” Zguro said. “I was very scared when I moved to Texas, and I didn’t know what the future held for me. But then I came here, and I met so many good people.”

Zguro cannot say enough about her professors and the friends she has made. For example, Zguro said Parsons is more than a professor as she has freely offered guidance and helped Zguro move into an apartment.

“Alba has established herself as one of the outstanding pianists within the department, and also an exceptional musician in the wider School of Music student body,” Parsons said. “She has all of the skills necessary to build a successful career in music: dedication, work ethic, talent, passion, and curiosity.

“She has worked tremendously hard and overcome great odds to study in the U.S. She’s an inspiration to all who work with her, including myself.”

Her formative experiences are not confined to the School of Music and the CGE. Classes such as British Literature, Christian Heritage and Christian Scriptures have influenced her life.

“I grew up Muslim and Catholic in Albania. My parents are two different religions, and I knew from them that there was a lot to learn, but until I came and I really studied Christianity and all the scriptures myself, I really had no idea, honestly, how big and how awesome the Christian religion is,” said Zguro, who has come to identify herself more as a Christian since coming to Baylor. “Those classes opened up my eyes and my mind. I didn’t go to church whenever I first came to Baylor, and now I have started going to church more often. It’s been a rewarding thing.”

“Baylor’s such a great school for making friends and having a community of people to talk to and to even have disagreements with, but it’s all part of the University experience,” she said. “You have the freedom to do that at Baylor. We’ve left our countries to come and find a great future for ourselves. In order to do that, we have to seek it.”

Upon graduating from Baylor, Zguro plans to attend graduate school.

“After that, I’d like to see myself performing as much as I can for people all over the world and even teaching,” she said.

Alba Zguro and all of Baylor’s international students are key members in helping Baylor carry out its mission — and flinging its green and gold afar.