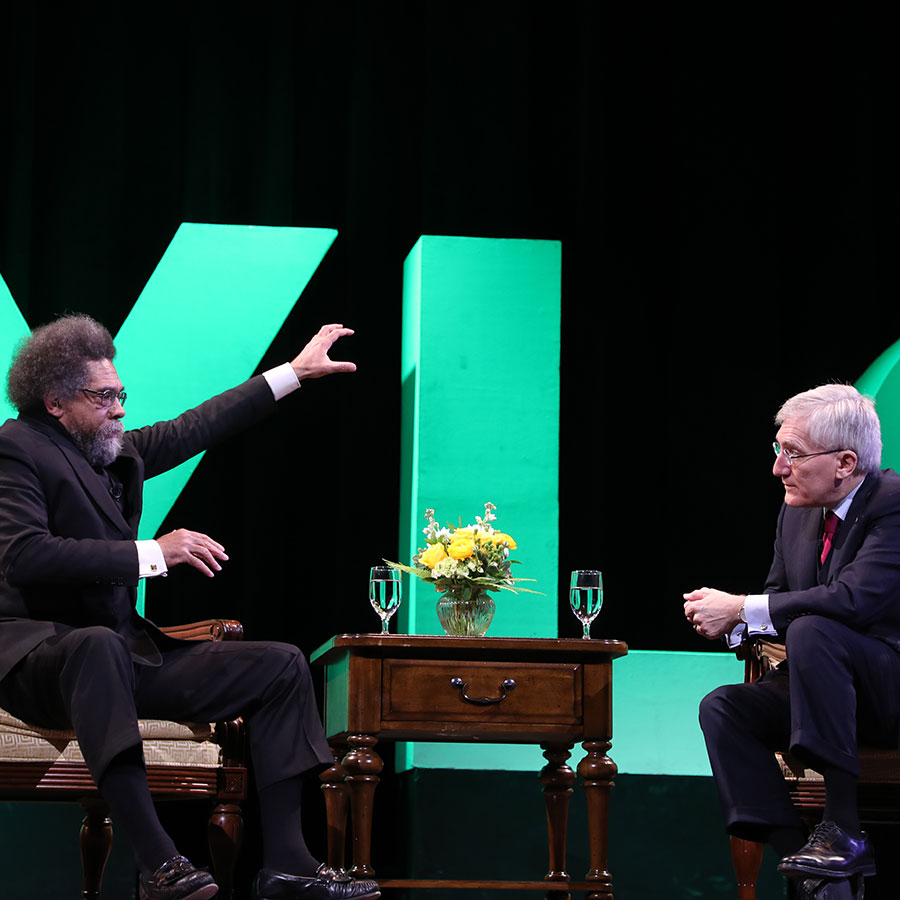 A Most Civil Conversation

Four quotations are inscribed on Pat Neff Hall, each one located just below the eaves on the exterior walls. These words carried great significance for Texas Gov. Neff, who served as Baylor’s eighth president, and they continue to inspire us today. One of them reads, “The Youth of a Nation are the trustees of posterity,” quoting Benjamin Disraeli, a British prime minister during the 19th century.

This is another way of saying that a nation’s future health lies in the hands of today’s young men and women. They will shape tomorrow’s world.

As I look out from my office in Pat Neff Hall, I see the faces of the future. They belong to our students, a community of almost 18,000 that has come to our campus from around the world to receive a transformational education. They are the youth of many nations, and it is our sacred responsibility to nurture in them the values and equip them with the skills and knowledge necessary for achieving success in their professional careers and in contributing to their communities.

One of the central components of this education — and a cornerstone of Baylor’s educational curriculum and communal life for generations — is cultivating civil discourse.

We are called to respect and learn from one another in a manner that reflects God’s love for every person.

Today, the need to champion the importance of civil discourse — and to instill in our students the temperament and skills needed to engage in it — has never been greater. We live in a world in which it seems people struggle to get along with one another. Everyone has a “hot take” on current issues, opinions are at polar extremes and compromise is nearly non-existent.

While it may seem otherwise at times, diversity of thought is warmly embraced on university campuses, including here at Baylor. In fact, one of the hallmarks of higher education is creating an environment in which individuals are presented with a “marketplace of ideas” — a term first coined by John Stuart Mill in 1859 — within which they determine their opinions and beliefs on issues and learn to express those convictions in informed and respectful ways.

At Baylor, we hold ourselves to an even higher standard as a Christian research university. We are not only guided by diverse thought and scholarly inquiry, but also through Scripture and the example set forth by Jesus Christ. We are advised to be “quick to listen, slow to speak, and slow to become angry” (James 1:19). We are also, as Christians, called to “encourage one another and build each other up” (1 Thessalonians 5:11).

In Illuminate, Baylor’s strategic plan, we quote the noted scholar John DelHousaye in saying, “Human flourishing is not conjured from man-made programs, but emerges from image-bearers of God working creatively and interacting with others for the individual and common good.”

Such interaction inevitably involves coming up against differences — in backgrounds, in norms of behavior and in opinions. Universities are, at their best, a microcosm of the larger world in bringing diverse people into close contact for the benefit of both individuals and societies.

At Baylor, we welcome individuals from around world to our campus just as Christ welcomes all into his arms, and the Baylor Family’s diversity lies at the core of our mission to transform lives and serve others. This diversity comes in many forms, from race and gender to socio-economic status and physical attributes. We are called to respect and learn from one another in a manner that reflects God’s love for every person.

The concept of a marketplace of ideas has been central to the development of Western society and American higher education. Indeed, the value of the free exchange of ideas is enshrined in the First Amendment to the United States Constitution.

Our culture of intellectual curiosity and academic freedom is an expression of our Christian identity. We believe all truth is God’s truth, fully open to inquiry and debate within the marketplace of ideas. Indeed, as a faith-based research university Baylor has the freedom to guide students in the consideration of important issues across the spectrum from every possible perspective — ethical, religious, and intellectual.

My long-held belief is that in encouraging debate and providing a safe environment for dissent on our campus, Baylor is preparing our students for active citizenship in the world.

Strengthening our students’ abilities to engage in civil discourse during their student years will redound to their benefit as they move out into the world. Practicing civil discourse undoubtedly makes us stronger as a community, with each person able to contribute his or her perspectives and enriching wisdom gained from a unique path through life.

This fall, we hosted a Baylor Conversation Series focusing on civil discourse for the campus community. Our goal was to show that whether in politics, church congregations, on the Baylor campus or even within our own families, there is a significant need for civil discourse in today’s society.

This series included panel discussions, roundtables and an exciting concluding event as we welcomed Dr. Robert P. George from Princeton and Dr. Cornel West from Harvard to Baylor in November. These two nationally renowned speakers and distinguished scholars from opposite ends of the political spectrum have learned how to respectfully disagree and have developed a deep friendship.

From my conversations with students in recent weeks, I know they came away from these enriching events with a greater understanding that while we may not always agree, we should demonstrate mutual respect, objectivity without hostility and an appreciation of the experiences of others. I cannot think of a more valuable practice for each of us to employ than that of loving our neighbors even when our beliefs on a matter differ.

Each day continues to be a blessing at Baylor as we work to develop the next generation of leaders.