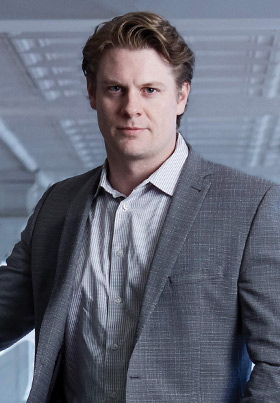 In 2016, Marshall Stewman, MBA ’13, found himself returning to his hometown of Waco. He and business partner Peter Thyen decided to sell their Deluge Holdings real estate portfolio in the Dallas-Fort Worth Metroplex and invest in Waco’s downtown.

Their longtime friend Cameron Goss, BA ’04, owner of Bowen Electric, joined them to purchase and renovate a warehouse near Magnolia. Mary Avenue Market, 300 S. 6th St., houses a pie shop, a tapas-style restaurant and several retail stores along Mary Avenue, which is becoming a “festival street” from Balcones on 11th Street to University Parks Drive.

“Opportunity to do things downtown brought me back to Waco,” Stewman says. “What Chip and Joanna (Gaines) are doing is incredible, and I think that was the impetus that Waco needed—a spark to keep the progress going. I’m excited about Waco grads staying in town versus the mass exodus that used to take place. The best part is the fresh culture coming here and bringing new ideas.”

When Goss and Stewman attended the former Ninth Grade Center near the entrance to Cameron Park, neither imagined they would ever frequent downtown Waco, much less become part of its revitalization. Witnessing firsthand the establishment and growth of Magnolia, Goss realized the area had definite potential.

“It was a cool idea, but I still thought Marshall was insane,” Goss says. “Once he explained it more and showed me the look of the building, it was like, ‘Man, this could really work.’ Ten years ago, five years ago, two years ago, I would have said, ‘There’s no way.’”

The group also has purchased 600 Columbus Ave., a 1920s building they plan on turning into a visually appealing workspace.

“We want it to be a fun place where people want to work,” Stewman says, adding he believes being a part of downtown’s revitalization is his purpose. “The opportunity’s right, but also, friends like Cameron were here, and the foundation was here all along. I just didn’t see it before. The momentum has started downtown, and it’s going to be pretty tough to stop.”