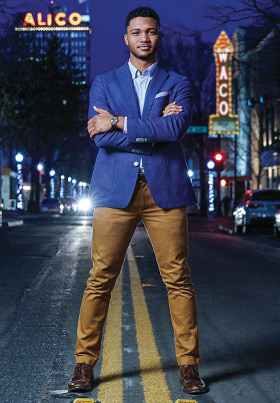 Upon arriving in Waco, Renois was fascinated by how the city worked. Attending Church under the Bridge whet his appetite for service to the city.

“There were a lot of people in Waco who were enamored with the idea of making Waco a better place. I was not used to this. In some of the American cities I’d been to, everyone was there to experience the place and didn’t really think they could move or budge it,” he says. “People here really think they can make something happen. And I thought, ‘Well, I guess if they think they can, I can, too.’”

Instead of pursuing a prestigious fellowship program in Washington, D.C., Renois created an opportunity for himself in Waco.

After visiting with city leaders about some of the gaps in the support system for people wanting to start their own businesses, Renois proposed to start and direct City Venture Waco under an existing economic development organization: City Center Waco. Baylor and Waco each pay half of his salary, as is done for Evan Hebert, BA ’15, who holds a related position with the CampusTown initiative through Prosper Waco.

Renois and Jake Cockerill, BBA ’15, manager of entrepreneurship and innovation at the Greater Waco Chamber of Commerce, organized 1 Million Cups Waco—weekly meetings downtown where entrepreneurs gather to learn from each other. Another project Renois and Cockerill have undertaken facilitates a large, aesthetically pleasing co-working space for entrepreneurs in the center of downtown.

“Even from the time that I started at Baylor to now, there is a shifting perspective,” Renois says. “We can make it cool to be a young adult in Waco, and more and more talented people are sticking around. Whether we’re in Waco for the rest of our lives or for a short time, I think all of us want to make something incredible happen while we’re here, to give back to the city that’s become a second home or building the city for ourselves in a way that we feel is necessary.”