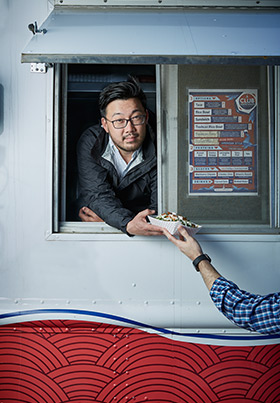 Originally from Houston, Moon has witnessed many changes during the 18 years he has lived in downtown Waco. He opened his food truck in 2014, and it is now one of 15 in the downtown area.

“I always thought I would end up in a big city, but I grew to love Waco—the charm and characteristics of a small town in a medium-size city,” he says. “Downtown has a lot of hidden gems, and there’s so much fascinating history; not everyone realizes that back in the day, Waco was a big deal.”

For incoming business owners, Moon says getting to know the neighbors is important.

“There is a very strong downtown community,” he says. “Everybody downtown really wants to help other people opening new businesses. We root for each other and, even if we have competing business, there is an understanding that we’re all in this together.”