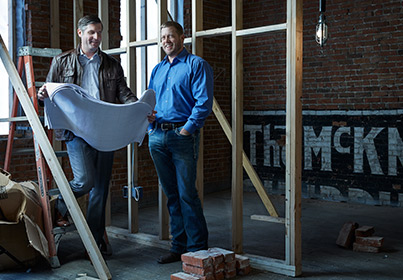 “There was a lot of skepticism from the older generations because they've seen attempts at revitalizing downtown fail before, but we kept doing what we thought was going to work,” Shane Turner says.

With more than 25 projects completed and at least six others—representing 100,000 square feet of restaurant and retail space—coming online in 2017, the Turners have helped transform sizeable swaths of the downtown area. Their projects include restoration of the historic Hippodrome, adaptive reuse of buildings and new construction. The brothers have added more than 400 residential units to downtown.

Shane owns Lucra Real Estate and handles all the leasing and property management. Cody owns Kunkel Construction and handles the building and reconstruction. Condominiums, multi-family housing units, and spaces for retail, restaurants and offices are all in the Turners’ wheelhouse.

Before the revitalization wave started, the Turners were intrigued by the opportunity to obtain City of Waco Tax Increment Financing (TIF) grants available to downtown developers. TIF funds helped mitigate some of the risk. The area’s recognition as a historic district and cultural district generated additional downtown activity.

“In 2006, we had to give tenants very good deals to move in,” Shane Turner says. Today, their properties are 100 percent leased.

He says the Hippodrome has been the most complicated project, but it needed to be restored because it is symbolic of downtown’s upward trajectory.

Among other endeavors, the Turners and their partners, which include Todd Behringer, BA ’88, are working on large projects at University Parks Drive and Mary Avenue and 11th Street and Interstate 35. The former will be restaurant/retail/office space, and the latter will add two hotels and other developments.

“Downtown hasn’t ‘made it’ by any means. We’re still climbing the hill here, and we need more rooftops in downtown,” Shane says. “Housing is not as sexy as old theaters and redoing cool buildings, but it’s what we need so that the demographics can increase support for businesses like grocery stores.”

Photo: Shane Turner, left, and Cody Turner, right, review one of their current projects—the renovation of the former Waco Labor Temple building as part of Franklin Square, a 66,000 square-foot development on Franklin Avenue between Seventh and Eighth Streets.