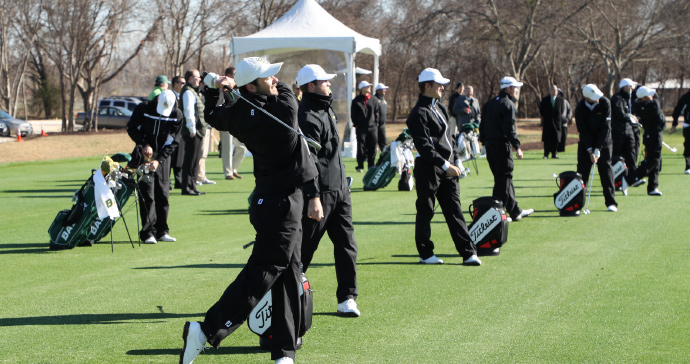 The Williams family’s lead gift made it possible to relocate the golf teams to campus after years of practicing at Ridgewood Country Club and Twin Rivers Golf Club, both of which are more than a 15-minute drive from campus. The new facility is located west of the Willis Family Equestrian Center—much closer to campus.

“I can walk to the new facility from my apartment,” women’s team senior Maggie Beth Byers said. “It’s definitely going to give us an advantage in recruiting and practicing and having everything at our fingertips.”

Designed by course architect Chet Williams and constructed and groomed by Associate Director of Athletic Facilities and Operations Joe Todaro, the Williams Golf Practice Facility has returned dividends in recruiting.

Men’s team freshman Cooper Dossey originally committed to Texas A&M but instead signed with Baylor, a decision the Austin native largely credits to the new facility.

“Chet Williams did an amazing job with the bunkering because you can go at almost any angle to any of those target greens and find a shot that looks like a shot you would be playing on a golf course at some point,” men’s coach Mike McGraw said.

McGraw said the facility’s multiple greens will better prepare Baylor’s teams for tournaments from Colorado, where bent grass is prevalent, to Florida, where Bermuda is the norm.

“We’ve been out at Ridgewood on perfect bent grass greens with speed,” McGraw said. “You go down to Houston, and it’s completely different. At least the preparation will be more similar.”

Evidence of the facility’s value were immediate as the men’s team defeated No. 1 Vanderbilt by five strokes in the spring’s first event—the All-American Intercollegiate at Golf Club of Houston. Dossey won the individual title, besting the field by three strokes.

There are plans to add wedge pits this spring along with aesthetic additions. The Williams family also provided a lead gift for the construction of a clubhouse, while fundraising continues for team locker rooms, coaches’ offices and hitting bays.